Hailey Bieber poked fun at herself on Friday, Jan. 6, stepping out in a look that truly spoke louder than words. The Rhode mogul channeled the ’90s in a crop top with loose hip-slung vintage jeans from Levi’s. She completed the look with an embellished belt, a Prada baguette bag, and chunky studded oxford shoes designed by Proenza Schouler. While at first glance it appeared like a simple T-shirt-and-jeans outfit, it was what was written on her custom X Karla baby tee that made quite the statement. That is, of course, because Bieber’s top read “Nepo Baby.”

Nepo Baby is a term coined on social media that was most recently reported on by New York Magazine in their December 2022 cover story. “An unwieldy phrase — ‘the child of a celebrity’ — was reduced to a catchy buzzword: nepo baby,” Nate Jones wrote. “TikTokers produced multipart series about nepo babies who resembled their famous parents, exposés on people you didn’t know were nepo babies (everyone knew), and PSAs urging celebrity parents to roast their nepo babies “to keep them humble.'”

Bieber was featured prominently in the issue because her uncle, actor Alec Baldwin; father, actor Stephen Baldwin; and husband, Justin Bieber are all celebrities (the latter earning her the moniker “nepo wife”). But Bieber has also made a name for herself, modeling, designing, and even launching a skincare line. Thus, some saw Bieber’s top as a way of reclaiming the term and the negative associations that accompany it, showing the world that her success goes beyond her family names.

Since Bieber’s outing, several fans and celebs have spoken out about her sartorial statement. Gwyneth Paltrow commented “I might need a few of these” and Charli XCX tweeted “i respect the nepo baby tshirt attempt.”

Fans were divided on Bieber’s look, with some claiming it didn’t have an impact and others coming to her defense. One social media user tweeted: “The Hailey Bieber nepo baby shirt picture gives nothing because she gives… nothing. She’s not personable enough to give this staged paparazzi shot for a viral moment any personality. She’s doesn’t act or sing. She gets in & out of cars in beige and black YSL & has a skincare line.”

“The only reason people aren’t eating up the nepo baby shirt is because they don’t like Hailey to begin with. She served and you know it. Deal and heal,” another said in response. 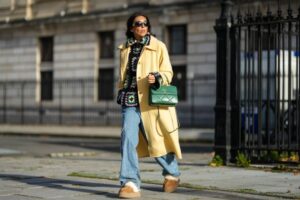 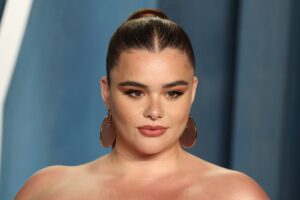 Barbie Ferreira’s Cutout Swimsuit Has a Subtle Connection to “Euphoria” 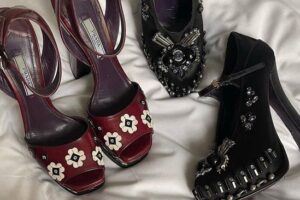