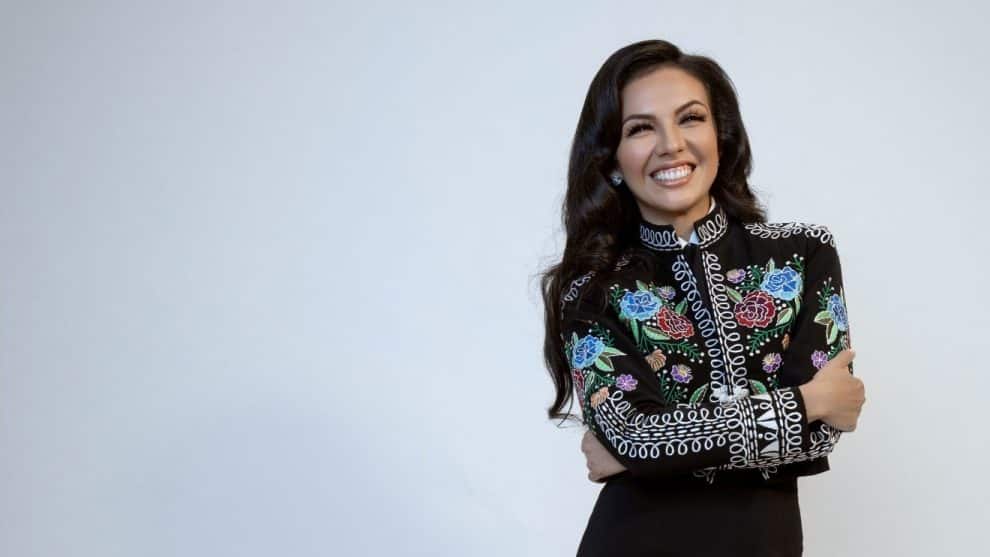 The Mexican American singer-songwriter Lupita Infante is part of an emerging generation of ranchera artists who are so deeply steeped in their traditions that they possess the confidence and expertise to brilliantly remake them for their Millennial and Gen Z fans.

Lupita Infante was nominated at the 2020 Latin GRAMMYs® for her song “Dejaré,” (co-written with Luciano Luna). At the ceremony, she was backed by El Mariachi Sol de México to perform a warmly received tribute to her grandfather. Her debut album La Serenata was also nominated at this ceremony, as well as at the 2021 GRAMMYs®. Its hit-single title track was co-written by Lupita and Erika Vidrio features an empowering, feminist message. In early 2022, she signed with Sony Music Latin as her career continues to develop and expand.

She makes her Sony Music Latin debut with the single “Hazme Tuya,” which she co-wrote with Alfredo “El Komander” Ríos. A fusion of mariachi, norteño and Sierreño music, it cleverly uses lyrics with multiple meanings to portray a woman who takes charge of the contours of a relationship.
Her name is instantly familiar to tens of millions of Mexicans, as she is the granddaughter of Pedro Infante Cruz (1917-1957), the most beloved Mexican singer and actor of the 20th century.

Lupita’s story begins in Bellflower, California, a 30-minute drive from downtown Los Angeles, where she was born to the singer and actor Pedro Infante Jr. (1950-2009), and Marisol Esparza. Lupita’s parents had met a few years earlier when Infante Jr. was performing at Los Angeles’ historic Million Dollar Theater, which for decades was the top local venue for prominent Mexican artists on tour.

While she was in early elementary school, the family lived in Huntington Park, California, and Lupita recalls having a normal childhood. In fact, her classmates’ parents were incredulous when she expressed pride in her father and grandfather. “Sometimes parents wouldn’t believe me, and they would tell their kids, ‘That’s not true!’ I would come home crying to my mom like, ‘Nobody believes me!’ There were times when I was able to take my dad to school, and I was really proud of that, to show him off.”

When she was 7, the family moved to Downey, California, and her famous lineage became even more of a secret. “I just went under the radar. A lot of my teachers were white, so they didn’t really know. The younger students didn’t know who Pedro Infante was, either.”

Though she never pursued singing as a child, by the time she was ready for college, she knew that she wanted to develop her innate musical abilities. She turned down opportunities to study vocal performance at several prestigious universities in order to major in Ethnomusicology at UCLA. She also joined the school’s renowned Mariachi de Uclatlán, which is the oldest university mariachi in the United States with an over 50-year trajectory.

Studying ethnomusicology gave Lupita the chance to rediscover Pedro Infante’s legacy through the works of academics: “I would write about Mexican music and research women in mariachi music, and study machismo in Mexican music and how that translated through my grandfather. I think that was a lot more interesting than if I had majored in vocal performance.”

In order to pay her tuition, she worked as a Lyft driver. She graduated from UCLA in 2017. “I was driving for Lyft to be able to pay my bills. I knew I wasn’t the kind of person who was going to be stuck in an office, even though it means sacrificing that security.”

Her legal name Lupita comes from her paternal grandmother, Guadalupe Torrentera, who lives in Colima, Mexico, and is affectionately known as Lupita. She still keeps an active pace 65 years after Pedro’s death.

Meanwhile, the multiple skills of her grandfather continue to inspire her: “My grandfather was not only an incredible innate actor, he was also a singer; he played various instruments, he was a pilot, a carpenter, and a barber. And he was pretty good at all of them. There are a lot of those things that do interest me except for being a pilot.”

In fact, her grandmother was with Pedro Infante on a fateful night in 1949 when the small plane he was piloting ran out of fuel and made a hard improvised landing in Michoacán. Infante was seriously hurt, while Torrentera suffered minor injuries. Hearing this harrowing story has convinced her to stay away from small planes. “My grandmother remembers vividly how people ran over to see what was going on, and they recognized him right away and were trying to help him. He stopped them and told them to look after her first and have her taken care of. She remembers that part where he was really concerned for her well-being. I don’t think I would ever want to travel in a small plane.”

Now, Lupita Infante intends to continue writing chapters of her family’s musical legacy, while maintaining the down-to-earth humility that has always characterized the Infante family even in the face of massive success. Her debut album La Serenata received critical acclaim for its mix of classic remakes and original material. It also showed off her ability as a songwriter, a new talent in the Infante dynasty that she is eager to continue perfecting. “My dad and my grandfather weren’t really songwriters. That’s something special that I can offer. Maybe I’m not all of the things that they were, but look at this part of me. I can connect with you this way.”

Lupita Infante has been busy writing and recording her second album, and its release on Sony Music Latin will introduce her personality, voice and fascinating musical ideas to vast new audiences.