April 21, 2014 HBO Latino joins in celebrating the legendary career of 10-time Grammy award winner, international music icon and philanthropist Carlos Santana and his forthcoming first-ever Latin music album entitled Corazón, through a two part event: a special called Santana: De Corazón and the airing of his mega concert and documentary Santana-Corazón: Live From Mexico, Live It To Believe It.

The Santana-Corazón: Live from Mexico: Live It to Believe It concert and documentary will air exclusively in the U.S. on HBO Latino on May 3rd, at 8:00 p.m. ET/7:00 p.m. CT. It will also be simulcast in Latin America and the Caribbean.

Cited by Rolling Stone as #15 on the magazine’s list of “100 Greatest Guitarists of All Time,” Santana will delight Hispanic and mainstream audiences in HBO Latino’s airing of the once-in-a-lifetime tribute concert that took place at a sold out Arena VFG in Guadalajara, Mexico this past December. 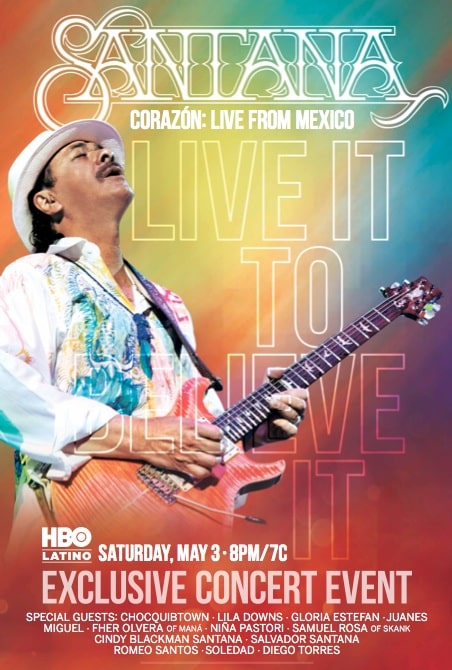 The Santana: De Corazón half-hour special spotlights the iconic Mexican-American artist through a collection of interviews by his musical peers, fellow Santana-Corazón: Live from Mexico: Live It to Believe It concert performers, mixed with touching insights from members of his most intimate circles.

Corazón, the concert and album project brings Carlos back to Guadalajara near his birthplace, and celebrates Carlos’ love of his musical heritage, as well as showcases Carlos’ own personal influence on Latin music and on today’s generation of Latin superstars. Many genres of Latin music are represented in these collaborations including pop, rock, salsa, hip-hop, R&B, reggae, and more.

About SANTANA: For forty years and as many albums later, Santana has sold more than 100 million records and reached more than 100 million fans at concerts worldwide. To date, Santana has won ten GRAMMY ® Awards and three Latin GRAMMY ® Awards. He won a record-tying nine GRAMMYs for a single project for 1999’s Supernatural (including Album of the Year and Record of the Year for “Smooth”). He has also received the Billboard Century Award (1996), was ushered into the Rock and Roll Hall of Fame (1998), and received the Billboard Latin Music Awards’ Lifetime Achievement honor (2009). Among many other honors, Carlos Santana has also been cited by Rolling Stone as #15 on their list of the “100 Greatest Guitarists of All Time.” Celebrating the chart debut of Guitar Heaven (Arista) in 2010, Santana joined the ranks of the Rolling Stones as the only musical act in chart history to score at least one Top 10 album in every decade beginning with the 1960s. In 2013, Carlos Santana was the recipient of the 2013 Kennedy Center Honors Award. In spring of 2014, Santana embarks on an 18 show US tour with Rod Stewart as well as announcing stand alone dates for ‘The Corazon Tour.’ 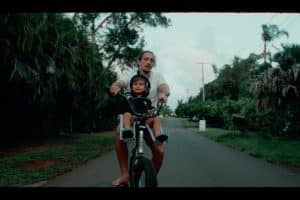 Landon McNamara Release New Music Video “If You Only Knew”