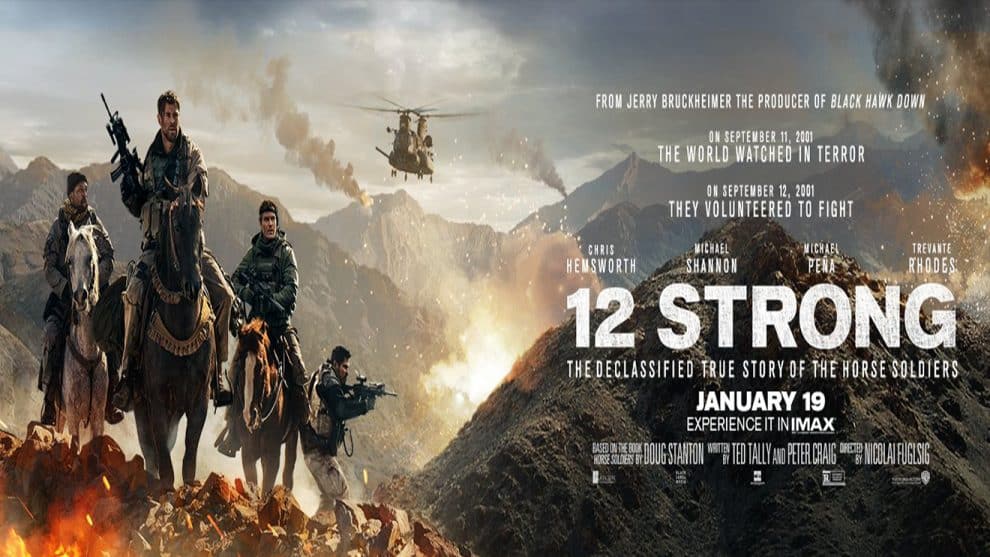 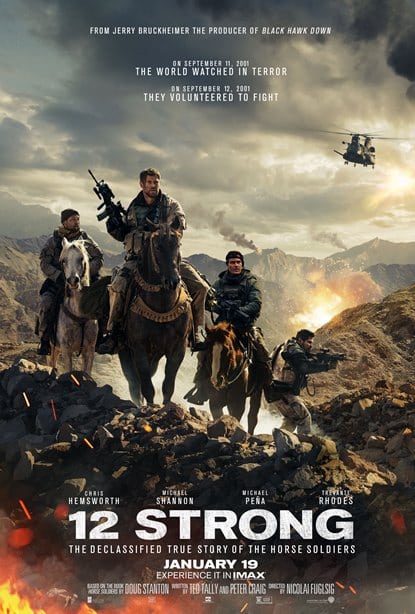 Chris Hemsworth (“Thor,” “The Avengers” films) and Oscar nominee Michael Shannon (“Revolutionary Road,” “Nocturnal Animals”) star in “12 Strong,” a powerful new war drama from Alcon Entertainment, Black Label Media and Jerry Bruckheimer Films that tells the declassified true story of the Horse Soldiers.  Based on the best-selling book Horse Soldiers, it is story of heroism based on true events that unfolded a world away in the aftermath of 9/11.

Award-winning director Nicolai Fuglsig directed the film, which is produced by legendary producer Jerry Bruckheimer (the “Pirates of the Caribbean” films, “Black Hawk Down”), together with Molly Smith, Trent Luckinbill and Thad Luckinbill (“La La Land,” “Sicario”) under their Black Label Media banner.  Oscar winner Ted Tally (“The Silence of the Lambs”) and Peter Craig (“The Hunger Games: Mockingjay, Parts 1 & 2”) wrote the screenplay, based on the acclaimed book by best-selling author Doug Stanton. The executive producers are Oscar nominees and Alcon principals Andrew A. Kosove and Broderick Johnson (“The Blind Side”), together with Chad Oman, Mike Stenson, Ellen H. Schwartz, Garrett Grant, Yale Badik, Val Hill and Doug Stanton.

“12 Strong” is set in the harrowing days following 9/11 when a U.S. Special Forces team, led by their new Captain, Mitch Nelson (Hemsworth), is chosen to be the first U.S. troops sent into Afghanistan for an extremely dangerous mission.  There, in the rugged mountains, they must convince Northern Alliance General Dostum (Navid Negahban) to join forces with them to fight their common adversary: the Taliban and their Al Qaeda allies.  In addition to overcoming mutual distrust and a vast cultural divide, the Americans—accustomed to state-of-the-art warfare—must adopt the rudimentary tactics of the Afghan horse soldiers.  But despite their uneasy bond, the new allies face overwhelming odds: outnumbered and outgunned by a ruthless enemy that does not take prisoners.

“12 Strong” has been rated R by the MPAA for war violence and language throughout.

Synopsis: 12 Strong tells the story of the first Special Forces team deployed to Afghanistan after 9/11; under the leadership of a new captain, the team must work with an Afghan warlord to take down the Taliban.