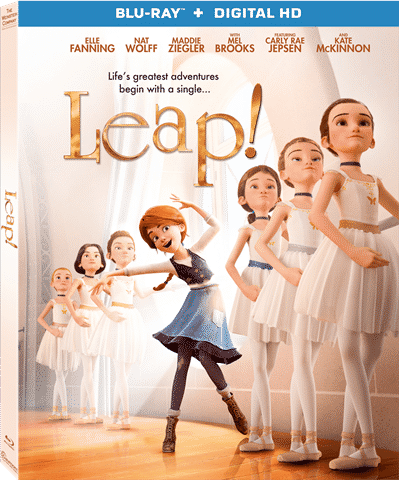 NEVER STOP REACHING FOR YOUR DREAMS

SANTA MONICA, CA (October 3, 2017) – Celebrate the holiday season with the inspirational and uplifting family film Leap!, arriving on Digital HD November 7 and Blu-ray™ (plus DVD and Digital HD), DVD, and On Demand November 21 from Lionsgate. Featuring all-star voice talent led by Elle Fanning (Maleficent), alongside Nat Wolff (The Fault in Our Stars) and Maddie Ziegler (The Book of Henry), with Mel Brooks (Spaceballs), featuring Carly Rae Jepsen (singer-songwriter of the hit song “Call Me Maybe”) and Kate McKinnon (“Saturday Night Live”), Leap! is a colorful and imaginative story about an orphan girl who is determined to follow her dream of becoming a ballerina. Filled with irresistible original music, Leap! features the hit track “Cut to the Feeling.”

Eleven-year-old orphan Félicie (Fanning) has one dream — to go to Paris and become a dancer. Her best friend, Victor (Wolff), an imaginative, exuberant boy with a passion for creating, has a dream of his own — to become a famous inventor. In a leap of faith, Victor and Félicie leave their orphanage in pursuit of their passions. But there’s a catch: Félicie must pretend to be the child of a wealthy family in order to gain admittance to the prestigious and competitive Opera Ballet School in Paris. And with no professional dance training, she quickly learns that talent alone is not enough to overcome the ruthless, conniving attitudes of her fellow classmates, led by the devious Camille Le Haut (Ziegler). Determined to succeed, Félicie finds her mentor in the tough and mysterious school custodian, Odette (Jepsen), who, along with Victor’s encouraging friendship, help her reach for the stars.

An animated adventure the whole family will enjoy, the Leap! home entertainment release includes a behind-the-scenes video gallery and a look at stars Kate McKinnon, Nat Wolff, and Maddie Ziegler in the recording booth. Leap! will be available on Blu-ray (plus DVD and Digital HD) and DVD for the suggested retail price of $39.99 and $29.95, respectively.

Naya Rivera Decides To Give Her Marriage To Ryan Dorsey Another Chance; Cancels Divorce
Hugh Hefner Biopic Set Already In The Works With Jared Leto Set To Play The Leading Role