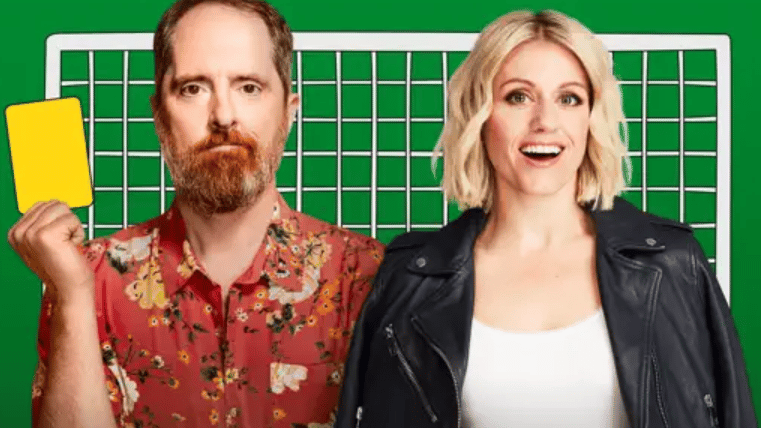 Apple is hitting the pitch for the 2022 FIFA World Cup with “After the Whistle,” an exclusive podcast hosted by Brendan Hunt, co-creator and star of Apple TV+ series “Ted Lasso,” and NBC Sports’ Rebecca Lowe.

Apple says “After the Whistle,” produced in partnership with Meadowlark Media, will provide “an entertaining and informative take” on the World Cup tournament action from “the perspective of two bona fide football superfans.”

“After the Whistle” will premiere Thursday, Nov. 17, with a preview of the global soccer tournament, which kicks off in Qatar on Nov. 20. The limited series will be available in Apple News in the U.S. and in Apple Podcasts in 103 countries and regions. New episodes will be available multiple times per week following key matches, with Hunt and Lowe recapping key plays, wins, upsets and off-field moments — and battling out their allegiances to the U.S. and English teams.

“Apple loves soccer — from ‘Ted Lasso’ to Major League Soccer, and now two of the game’s most exciting voices delivering listeners their take on all of the biggest moments of the tournament,” said Eddy Cue, Apple’s senior VP of services, in a statement. “We’re proud to offer our users around the world great ways to follow all the excitement with ‘After the Whistle’ and in Apple News.”

In addition to appearing as Coach Beard on “Ted Lasso,” Hunt is a lifelong soccer fan who closely follows MLS and the English Premier League. Lowe has been a soccer host in the U.K. and the U.S. for nearly two decades and currently is hosting her 10th season of NBC Sports’ coverage of the Premier League. In Apple Podcasts, Hunt and Lowe have also curated a “Listen With” collection of their favorite podcasts for listeners to explore.

Using the Apple TV app, soccer fans in the U.S. can watch all 64 matches on Fox Sports as well as Telemundo’s Spanish-language broadcast of every game on NBCUniversal’s Peacock.

Listen to the trailer for “After the Whistle”:

Margot Robbie-Led ‘Pirates Of The Caribbean’ Spinoff Killed By Disney, Oscar Nominee Says
Gabrielle Union Opens Up About Her Approach to Raising Zaya and Kaavia (Exclusive)