Warner Bros. is keeping their most prolific TV producer of the last decade in the fold. Greg Berlanti has closed a massive new four-year exclusive overall deal for his Berlanti Productions to remain at the studio for its television operations into the year 2027.

No financial terms are being disclosed but sources indicate that the pact is structured differently than Berlanti’s most recent blockbuster overall deal with Warner Bros. TV Group whose value had been estimated to be more than $300 million and as much as $400 million over six years. That agreement involved the studio buying out Berlanti’s backend on his shows, while the new deal is more of a joint venture with a big potential upside for Berlanti, sources said.

In success, based on the number of series the new deal yields and their profitability, it could be the biggest TV deal ever for Warner Bros. It marks the first re-up for a top TV creative talent since the Discovery merger, with the company’s new leadership sending a signal that, even with the cost-cutting measures, including a slew of write-offs, that have made headlines over the past nine months, they are willing to step up in order to keep the biggest names on their talent roster.

“Greg is a huge talent, and the impact of his prolific and powerful storytelling on Warner Bros. and audiences, and on our culture, is just ‘wow,’” said David Zaslav, CEO of Warner Bros. Discovery. “He began his career with us, and we are incredibly fortunate that he will continue to build and grow our TV studio into the future.”

Under the terms of the deal, Berlanti Productions will continue to develop new television programming to be produced by divisions of the Warner Bros. TV Group for all platforms, including WBD’s HBO Max, external streaming services, cable, and the broadcast networks.

Like the last time Berlanti re-upped with Warner Bros. TV Group, the new pact came together quickly with about two years left on his previous deal as Berlanti’s new agents at CAA worked through the holidays and Channing Dungey closed the deal for the studio, sources said.

The circumstances are very different though.

Five years ago, Berlanti had been public about his intention to stay at Warner Bros. TV, run at the time by one of his biggest champions, Peter Roth, who took him in two decades ago for a four-year stint at WBTV, during which Berlanti created his first series, Everwood, and then lured him back to the studio in 2011. Berlanti has been at Warner Bros. TV ever since, growing its footprint to break several times the record for a TV producer with the most shows at the same time, including having 20 shows on the air or in production during the 2019-22 season, taking over five nights of the week over six different networks and streamers. Berlanti Productions currently has more than 15 shows on the air or shooting.

Meanwhile, this past year brought a major upheaval in Berlanti Productions’ TV business, triggered by sweeping changes at Warner Bros., DC and the CW. Following the Discovery merger, there have been executive shakeups and restructurings across all divisions of Warner Bros., including the TV studio, HBO Max and DC whose IP has driven a significant portion of Berlanti’s TV portfolio. Additionally, Warner Bros. and Paramount Global’s CBS sold the majority of their 50% ownership stakes in the CW, where most of Berlanti Productions’ broadcast series have aired, putting the future of original scripted programming on that network in limbo. (As questions over the CW’s fate grew over the past year or so, Berlanti Prods. has been ramping up its HBO Max portfolio where the company has emerged as a top scripted series supplier.)

With so much uncertainty, many were wondering whether Berlanti would stay put or opt for a new TV home. (In features, Berlanti/Schechter Films has an exclusive first-look feature film deal at Netflix, which has two more years.) Speculation about his future further intensified a couple of weeks ago when Berlanti made a rare agency change, leaving his longtime representative at WME for CAA, where his team is lead by heavyweights Bryan Lourd and Joe Cohen. According to sources, WME had been in discussions with Warner Bros. TV Group about an extension of Berlanti’s previous deal before he left. He went on to make a brand new deal with his new agents.

“We’re beyond thrilled to continue our partnership with one of the most accomplished, celebrated, and compelling storytellers in the industry,” Warner Bros. Television Group Chairman and CEO Channing Dungey said: “Greg is a visionary, a pioneer, and a leader, but more than that, he’s a treasured member of the Warner Bros. family. Collaborating with Greg is a tremendous privilege, and we can’t wait to see what stories he and his team will bring to life in the coming years.”

Working with Dungey on the deal was Warner Bros. Television President Brett Paul, a studio veteran and the only member of the WBD/WBTV leadership team that was also involved in Berlanti’s previous pact.

A WGA, DGA, PGA and Emmy nominated writer, director, and producer, Berlanti began his TV career as a staff writer on Dawson’s Creek and became an executive producer and showrunner of the series after only one year on staff. That first gig launched a meteoric career rise for Berlanti who has produced or created more than 40 shows in the last 20 years, with more than 1,300 hours of television under his belt.

“Every day I wake up grateful I get to get tell stories for a living with so many talented people that I love. With this deal, I’ll be lucky enough to be going into my third decade of making TV and calling Warner Bros. my home,” Berlanti said. “The TV business has changed and Warner Bros. has changed, too, but I’m as grateful as ever to be making television and working with a passionate, brilliant, and kind leader like Channing Dungey and alongside a wise and tremendous old friend like Brett Paul. In my time getting to know David Zaslav, he is the most rare of Hollywood leaders: honest, loyal, and visionary about the kind of thriving Warner Bros. he wants to build for the future, where storytellers like myself can have a home to tell stories that excite and move audiences all over the world, for years to come.”

Berlanti was the architect of DC’s live-action television universe on the CW incorporating key comic book characters like The Flash, Superman, Green Arrow, Supergirl, and Batwoman, which has span a combined 38-season (and counting) run. Additionally, Berlanti started a second DC universe with Titans, Doom Patrol, and DC’s Stargirl, and is set to launch the upcoming new series Dead Boy Detectives for HBO Max as well as Gotham Knights on the CW this year.

Upcoming television series also include Found for NBC as well as More and The Girls on the Bus for HBO Max.

Throughout his career, Berlanti has been a leader and voice for inclusion in the entertainment industry, both on screen and behind the camera. In 2022, he received PGA’s Norman Lear Achievement Award for his career accomplishments and impact on the art and craft of television. 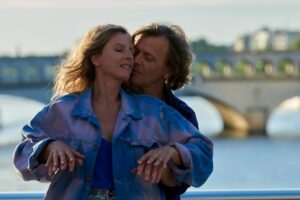