The Nov. 30 gathering at the Four Seasons Hotel in Beverly Hills also featured a panel with top lifestyle TV producers, showrunners and executives discussing the elements that make the genre unique. Jo Sharon, co-CEO of “Top Chef” production company Magical Elves, cited their experience in blending real-world response to the Netflix cooking competition series “Nailed It” into the fabric of the series in subsequent seasons.

“Having a show that created something that lived on out in the real world and had a life of its own was a great marketing tool,” Sharon said. “The trend of what people were doing, what how they were doing it, the videos they would post online – all of what was happening on Pinterest, we fed that back into the show. So that became this circle of life and it still is.”

During the opening Q&A with Cynthia Littleton, Variety‘s co-editor in chief, the Scott brothers recalled their humble beginnings on cable TV in Canada before their star took off about a decade ago with “Property Brothers: Forever Home” and other series on HGTV.

“When we started the show, it was so bad, because we were trying to be what we thought a host should be. When ‘Property Brothers’ hit, it was the time we were finally like, you know what, we’re not going to pretend to be something else anymore, we’re going to be who we are,” Jonathan Scott said. “And we thought there was an opportunity to help renovate people’s dream homes — but have a hell of a lot of fun while doing. And we thought if we had fun on camera with what we’re doing, the people at home watching are going to have fun as well. And it worked and so the less we tried to be something else, the more that we just tried to be ourselves, the more successful the shows became.”

The 44-year-old twin brothers rose to fame after Drew made his name as a real estate agent and home designer while Jonathan is the company’s contractor-in-chief.

The pair detailed the growth of “Property Brothers” franchise and how their massive retail footprint with home furnishings and décor products across a number of partners. The two were savvy enough to acquire the “Property Brothers” name and original series early on. They recalled how their original production company passed on an offer to partner with them on a retail furniture line – until it hit $200 million in sales, but by then the Scotts didn’t need any help.

The pair left no doubt they are twin brothers with a bit of banter about the origin of the “Property Brothers” moniker.

Drew: “I came up with it, but I was like, wait, no, they could replace us with two other ‘Property Brothers.’”

Jonathan: “Drew still has a picture of the original list. We wrote down like 18 names, everything from ‘Bungalow Brothers’ to…”

Drew: “One more: ‘Bros Before Renos.’ I’m glad we went with ‘Property Brothers.’ “

Magnolia Network’s Page has seen the lifestyle business blossom during her 20 years at Discovery’s HGTV, Food Network and Cooking Channel. She joined “Fixer Upper” stars Chip and Joanna Gaines as their TV executive leader in 2019 in preparation for the 2021 launch of Magnolia Network, the channel curated by the Gaines as a pillar of their Magnolia retail, e-commerce and publishing businesses.

Partnering with the entrepreneurial dynamos has been a fascinating ride at a time when all of media is changing, Page said during her Q&A with Littleton.

“We’re all in this rapidly evolving landscape where what was true a year ago or five years ago or 10 years ago, we’re just not living in the same world anymore. So you go into these things and there’s no example of what’s gone before you,” she said.

Magnolia Network series including the revived “Fixer Upper” led the charge for the integration of Discovery content with the HBO Max platform following the April merger of Discovery and WarnerMedia. Magnolia Network also exists in a third plane as a linear, ad-supported cable channel.

“We’ve seen that it’s working,” she said of the channel’s patchwork of distribution options. “Who knew if it was going to work on HBO Max and not Discovery+, or was it going to continue to work on Discovery+ but not HBO Max, what was it going to do to on linear?” Page said. “Seeing it work across all of these at the same time, I think it’s encouraging, both for the combined product and just a reminder that those shows, those hits, they work wherever you put them, which is exciting,”

But that same segmentation of TV viewing also makes it even more challenging than ever to build new unscripted franchises. “Then the challenge is, how do you make the next hit when you are in all of these different places?” Page said.

The panel of producers and executives spoke with Jennifer Maas, TV Business Writer for Variety, about how they’ve prospered in the business of showcasing experts in their fields and larger-than-life personalities.

Gwyneth Paltrow’s prosperous Goop lifestyle brand is increasingly expanding with original content on and off of its e-commerce platform, according to Noora Raj Brown, Goop’s executive VP of brand. Content is a good way to reinforce the core attributes of Paltrow’s vision for Goop.

“We’re incredibly wacky. But we are never a provocateur just for provocation’s sake,” Raj Brown said. That said, Brown offered a candid assessment of one of Goop’s recent series, “Sex, Love and goop.”

“We ask pretty extreme things from people,” Brown said. “We had six couples and had them show their most intimate desires and the things that were lacking in the relationship. And we were like, ‘Hey, do you mind doing this on television in front of everyone you’ve ever met. And to have that authenticity and that openness and (be) somebody who’s really willing to be vulnerable? I could never do it. On the first show, we literally gave people mushrooms, took them to Jamaica and said, ‘Confront your traumas.’ “

Jen Green, co-executive producer of the Freevee series “Hollywood Houselift with Jeff Lewis,” emphasized that with her star, what you see on screen is what you get. Really. Her job is to get it on camera.

“He’s just a very authentic person. That’s like his brand,” Green said. “Jeff is not someone I produce. I’ve been on shows where I produce everyone, you know? So that is the nice thing about working on this show is that he is himself. And that is what is represented on our show.”

Tamaya Petteway, senior VP of brand licensing and digital partnerships for Endemol Shine, echoed Magical Elves’ Sharon in emphasizing the value of shows that have such a following they inspire real-world extension, from cookbooks to cruises. Endemol Shine is home to unscripted staples including “Master Chef,” “Big Brother,” “The Biggest Loser” and “Deal or No Deal.”

“It’s something that we call our wheel of fortune. What we’re looking to do is ignite as many spokes on that wheel to really create a 360-degree partnership. So with ‘MasterChef,’ we have cookbooks, we have cookware, we have cruises and tours and cooking classes. I think we’ve done it all.”

“The one thing that drove me crazy about cooking shows is that you couldn’t taste the food,” she said. “I would listen to the judges critique the dishes, and I’d be like oh, my gosh, I wish I could experience that. So one partnership we just recently were able to do with GrubHub — we gave consumers the opportunity to order the food, the recipes curated by some of our contestants, and try it at home.” 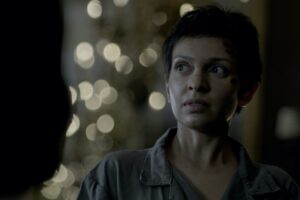 ‘Gran Turismo’ Film From Sony Rounds Out Cast With Six Additions
To Walk Or Watch: Our Critic Sticks With ‘Emancipation’