European production company Wild Bunch has announced a sequel to Spring Breakers, an almost art house-like film that follows four young women who get wrapped up in crime during their Florida vacation.

Called Spring Breakers: The Second Coming, the sequel will focus on spring breakers facing off against an extreme Christian sect, according to ScreenDaily. While Harmony Korine wrote and directed the first film, he will reportedly not be back for the second, with Irvine Welsh (the author of Trainspotting) supposedly writing the screenplay and Jonus Akerlund helming the project.

“It’s not a direct sequel, although there are allusions to some of the characters in the original,” said Wild Bunch co-chief Vincent Maraval, who also mentioned that there may be a collection of new and old cast members in Spring Breakers: The Second Coming.

Muse Productions, which owns the first film’s concept, will reportedly co-produce with Wild Bunch and Mars Films. There’s no word on whether any Britney Spears songs will be used yet in Spring Breakers: The Second Coming. 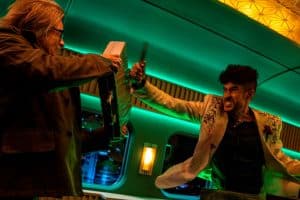