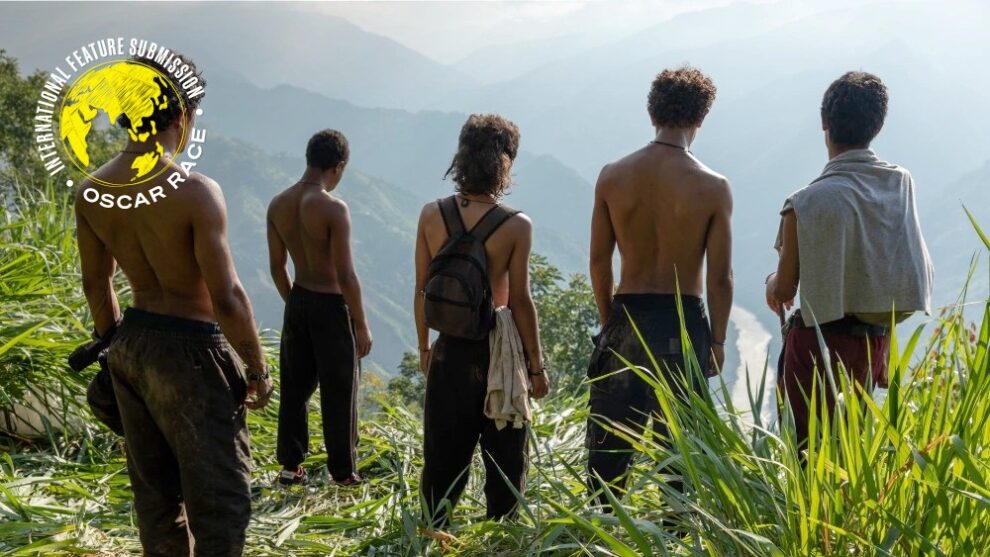 Laura Mora’s “The Kings of the World” has no shortage of beautiful shots. The Colombia-set road trip follows a group of four teenagers as they set out to start a life anew away from the violence and poverty they’ve long grown up with. As the film moves away from the bustling streets of Medellin and into the foggy Andean landscapes, Mora captures a vision of this country in transition that is as stunning as it is eye-opening. Every frame begs to be dissected for the way it conjures the promise of futures and freedoms while also stressing the perils and dangers of such possibilities.

One early such shot is that of Rá (Carlos Andrés Castañeda), shirtless and fearless, atop a white horse in the middle of an empty urban street. It’s our first introduction to this young man. By himself atop this wild horse, he looks equally regal and boyish, like something out of a fairy tale, if fairy tales could imagine paupers in a city that continues to feel the scars of a country’s decades-long conflict. The horse, with its promise of open plains and unencumbered horizons, slowly emerges as an apt recurring image in Mora’s follow-up to her 2017 sicario drama “Killing Jesus.” As with that award-winning film, Mora zeroes in not on the everyday violence Colombians have endured but on the tangible effects it has had on their lives.

Rá is one of many displaced folks who had had to roam the streets to get by, except he may have found a way to break away from such a life. The government has agreed to return land that had been taken from his grandmother (following reinstitution decrees designed to help those like Rá). It may have taken years, but such a legal victory feels like the glimmer of hope Rá needs to dream up a life anew. He sets his sights on heading back to the countryside where the plot of land now stands, and takes with him not just his brother (Cristian David’s Culebro) but three young kids (Brahian Acevedo, Davison Florez and Cristian Campaña) he’s come to adopt and care for on the streets of Medellin.

Their journey is perilous, of course, but not just because of the obvious. They are five boys who play at acting like men, after all — or like the men they’ve been taught and cultured to be: violent, irascible, selfish and only intermittently tender. Indeed, the skirmishes between them, especially between Rá and Culebro, swiftly move beyond mere roughhousing; their animosity may well become deadly. They’re all traveling with weapons ready-made for self-defense, but also for preemptive attacks.

Mora, along with co-writer Maria Camila Arias, empathetically paints a gripping portrait of a group of feral boys who struggle with breaking out of the script laid out for and by them. Street boys like them are made of and for violence. Their lives are both precious and precarious. As they hop on and hook their bikes onto freight trucks on Colombia’s steep winding country roads, their bravery could almost be mistaken for fearlessness. Instead, it’s a reminder that they’ve always lived on the edge. And they’ve made a home, however temporary and fragile, right there.

The dreaminess of the film’s aesthetic sounds like it’d make for a jarring juxtaposition with the story’s rugged edges (there’s blood to be spilled and lives to be mourned, you must know). Except Mora and her cast handily manage to ground this tale right on the edge between a waking daydream and a nightmarish reality. Straddling that line is that initial image of Rá on the white horse, which is scored by his hushed voiceover, which asks us to imagine a world where all the men have fallen asleep and all the fences of the world burst into flames. Even before we see him fend off attackers with a machete, curse out government agents for their inaction and inadequacy or pin his brother to the ground with righteous anger over inheritances lost, we get to see the kind of imagery this wounded young man pins his hopes on. It’s only a world without men that would allow him his freedom. Alas, he constantly has to navigate a world where he can’t escape them, where he can only become one.

At times playing like a nonfiction film (so authentic are the performances Mora has wrung out of these nonprofessional actors, so unobtrusive is David Gallego’s kinetic cinematography), “The Kings of the World” is shot with a welcome tenderness. There may be dangers ahead, but Rá and his merry band of Lost Boys anchor their journey in the firm belief of a future of any kind. And so, even as they face off against racist mobs and find refuge in makeshift brothels, theirs is a story of continued survival. As a melancholy trip toward a brighter present, “The Kings of the World” — even with its aggrandizing title — is a quiet triumph. As a metaphor for a country and a people, it is nothing short of miraculous.