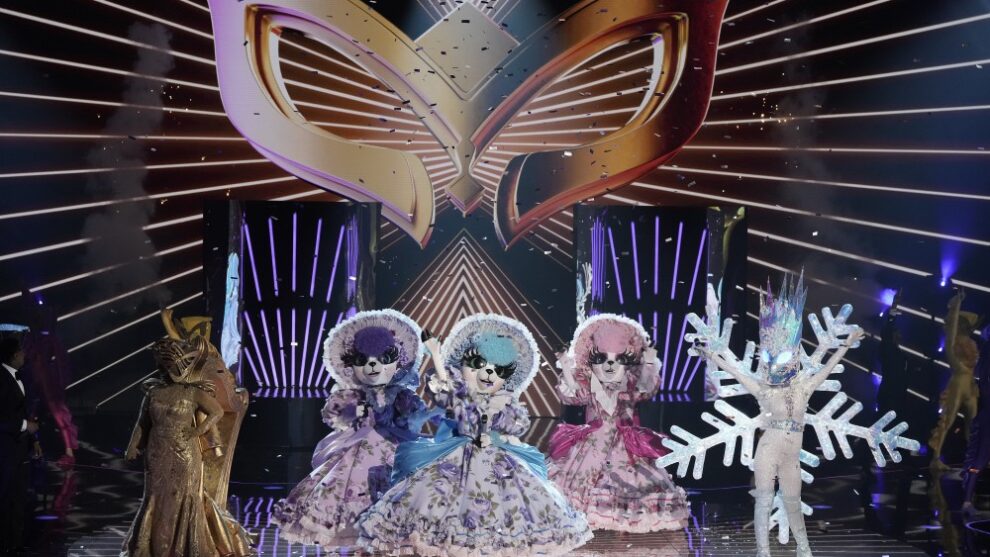 SPOILER ALERT: Do not read ahead if you have not watched the Season 8, episode 10, of “The Masked Singer,” “Battle of the Semi-Finals,” which aired Nov. 24 on Fox.

Two episodes in one week? “The Masked Singer” returned on Thanksgiving night for its semi-finals (and what appeared to be another subtle jab at host Nick Cannon’s baby making skills, via a chyron suggesting he’s sitting at the kids’ table).

Glaser was unmasked after facing off with Harp and Lambs in a three way battle royale (in which all three took turns singing the song “Since U Been Gone,” by Kelly Clarkson).

Nikki Glaser as Snowstorm joins Ray Parker, Jr., as Sir Bugaboo, Linda Blair as Scarecrow, Chris Jericho as Bride, Adam Corolla as Avocado, George Foreman as Venus Flytrap, George Clinton as Gopher, Joey Lawrence as the Walrus, Le’Veon Bell as the Milkshake, Kat Graham as Robo Girl, Jerry Springer as Beetle, Gloria Gaynor as Mermaid, Mario Cantone as Maise, Daymond John as the Fortune Teller, Barry Williams/Christopher Knight/Mike Lookinland as the Mummies, Montell Jordan as Panther, Jeff Dunham as Pi-Rat, Chris Kirkpatrick as the Hummingbird, Eric Idle as the Hedgehog and William Shatner as the Knight as the celebrities revealed in “The Masked Singer” in Season 8.

This season, “The Masked Singer” adopted a new “King or Queen of Masked Singer” format. That meant three or four costumed celebrities performed each week, but only one moved on to compete against two or three more people the following week.

Here were the contestants and their performances on night nine:

Song: “Thinking of You,” by Katy Perry

Previous songs: “Thank U, Next,” by Ariana Grande, “Sweet But Psycho,” by Ava Max

Clue: “Squiggly.” (Bob Saget) “Squiggly monster was a dear friend of mine who is no longer with us and it feels weird to cry with this voice.  But he was the reason I did this show because his experience was so rewarding and I’m so glad he was able to have it before he passed away. My performances have been for him, whether he wanted it or not.”

Package voiceover: “Ever since I was a little girl, I always dreamed of being a pop star. When I was in high school, I was taking voice lessons. And one day in high school, my mom said she got a call from my teacher, saying ‘I’m sorry, but your daughter doesn’t have it.’ That was the day my dream died. That’s why I’m thankful I’m still on this show. I’m really grateful for the opportunity to express myself in a way I never thought I’d be able to artistically. And I hope I’m making it to the finals next week and I can continue to inspire any kid of adult out there who doesn’t think they have it. Because I promise you, you do have it. You just have to unmask it. If my voice teacher is watching, don’t change the channel. Because proving you wrong someday has kept me going all these years. This one is for you, dreamkiller!”

Harp (moving on to next week’s finale)

Song: “About Damn Time,” by Lizzo

Previous songs: “Perfect,” by Pink; “I Have Nothing,” by Whitney Houston; “Thank You for Being a Friend” (“The Golden Girls” theme song)

Clue: Oprah Winfrey “When I met Oprah for the first time, I brought my mom with me and was going to introduce her, but before I did she said hello and already knew her name. You know you’ve made it when Oprah knows your name and your mom’s name.”

Package voiceover: “I’m really excited about making the semi-finals and I really want to win. I’m so grateful to be here because I’ve always been a fan of the show. Me and my family and friends always watch it, and it’s been very hard not saying anything. Now my sisters don’t know, my dad doesn’t know, my friends don’t know. My man doesn’t know. He thinks I’m filming a movie. My mom is the only person that I’ve told. My mom and myself are very alike. She was a singer just like me, she’s like my rock. If I had a handful of people who believed in me the way my mom believes in me, I know that I can soar so far. That woman thinks I can do anything. I want to win this for her. Thank you mom for being such a great example in my life and being my best friend.”

Lambs (Moving on to next week’s finale)

Clue: “Reunion.” “For a long time, I didn’t think that we would be singing together on a stage ever again. But I never gave up on the three of us getting back together. It’s unthinkable for us not to be singing together again for the rest of our lives.”

Package voiceover: “On this Thanksgiving, there’s nothing we’re more thankful for than each other. And that’s something we’ve always known, even when we were young girls. We were young ladies when we hit it big. And even though we were grateful, we were do burned out that we started to have issues. And it was just very sad. We knew that going our separate ways was the best decision at that time. It was a good thing for us. It really gives you perspective and a break. And you can find yourself again. When we reunited, it was like no time had passed. And that bond is what we’re taking into the semi-finals. We’ve won other awards in our lives, but it’s been a very, very long time. And we are ready for another win. We’re just going to fight over who gets to take the trophy.”

It May Be A Covid Christmas Again This Year
Gabrielle Union on Finally Getting Oscar Buzz for ‘The Inspection’: ‘I Believe I Found My Superhero Origin Story’