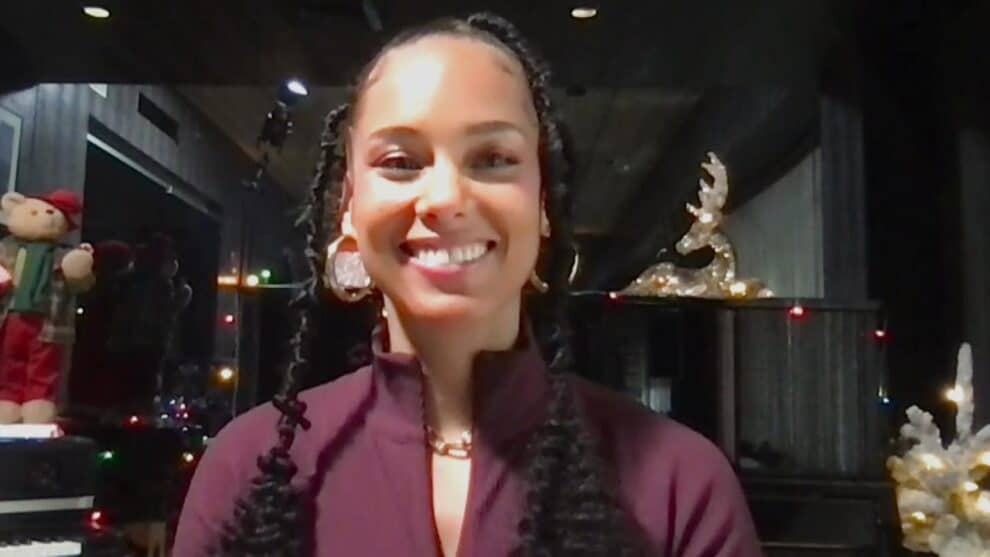 Alicia Keys is ringing in the holiday season with two special projects — a special holiday collection with lifestyle apparel brand Athleta and a new album! The singer released Santa Baby, her ninth studio album and first Christmas album on Tuesday.

“You have to do [a Christmas album] because it’s the best time of year, the energy is so good,” Keys told ET about her new project. “I’ve always wanted to but I just couldn’t believe it hasn’t happened already. So, I felt like this year was the year for it. I love this music, the music is so good. It’s gonna put you right in the mood. And Santa Baby is it, so you’re gonna love it!”

The new album has 11 tracks, including four original songs and seven cover versions of Christmas standards. The singer shared that she found it “pretty fun” to create wholly original Christmas songs, including her lead single, “December Back 2 June.”

“[The song] is all about how Christmas is all about the time when you are with people that make you feel good and love you,” Keys added. “And so, the song has such a playful energy to it — it almost sounds a little like a throwback Jackson Five type of vibe or something. I love the song so much, it’s right in my pocket. And I was so excited that I could create a new classic.”

The 41-year-old gushed that her original songs “fit right in” with the classics, sharing that there is “just something about tapping into the closeness, the energy, the joy, but also sometimes the reflection [of the holiday]. Even sometimes the sadness that I think fills the holidays for some [people]. So, I wanted to cover all of it and just warm you up.”

The singer revealed that she wrote and recorded her new album while on the Alicia + Keys World Tour and that her super-producer husband, Swizz Beatz, made sure to give his opinion before it was released.

“You know what, he definitely loved the vibe, the energy,” Keys said, reiterating that the album is meant to “get you in the mood.”

“I feel like it just puts you in a place. The best albums, to me, can create a flow that you don’t ever have to leave, like, you just sit and you sit in that whole flow. So, he loved that,” she added. “And there are definitely songs that he was like, ‘Man, that’s a favorite right there. I love that one.’ But he didn’t get too much into what maybe should or shouldn’t [stay]. He just enjoys it.”

Luckily, fans will also get a chance to enjoy Keys’ new music in person, sooner rather than later! The singer is set to perform at New York’s iconic Christmas tree lighting at Rockefeller Center on Wednesday.

Although the singer didn’t want to give away any of her surprises for the performance, she was happy to share how it felt to ring in such a momentous celebration as a native to the city.

“It’s kind of amazing because, you know, as a kid growing up in New York City, that was kind of the tourist thing that you just never did. You were like, ‘We’re not going to do that, we’re not going to go to the street,'” she recalled, laughing. “It’s gonna be crazy out there. But it was whenever I was able to drive past it, or the times when family was in town, and it’s really fun to go. And you do want to see it all lit up, it really is magical. So, to be able to be there and to kind of set off the energy of the tree lighting and kind of light up the festive season; it feels really, really good.”

Keys teased that she has “the most coolest songs” planned for her performance, sure to make the night one of the “warmest moments that you can possibly have.”

“You’re gonna feel it on a bunch of levels,” the singer vowed.