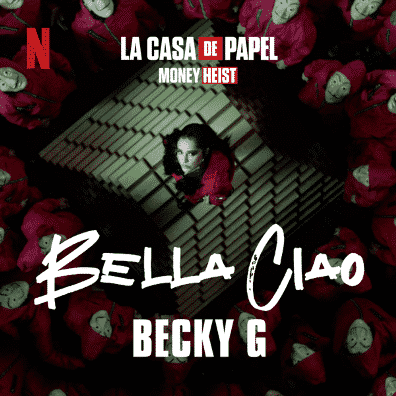 “Bella Ciao” has recently re-entered the pop culture zeitgeist as the unofficial anthem for the hit Netflix series La Casa De Papel (Money Heist).  Originating from 19th Century Italy, the song first appears in Part 1 of the show and the character Tokyo recounts in the season’s finale, ”The Professor’s whole life revolved around one idea… Resistance. His grandfather, who had fought with the Resistance to defeat the fascists in Italy, taught him that song. And then… he taught us.”

As a fan of the show, Becky is thrilled to partner with Netflix on her cover of “Bella Ciao.” Her cover comes alongside a music video which pays homage to the show with the iconic red jumpsuit and mask and of course the bars of gold from the Bank of Spain. The video is directed by Megan Gamez (John Legend, Mario).

Part 5: Volume 2, the finale of the series, will premiere globally on Netflix on 12/3/21. More info on the final episodes below.

About, “Bella Ciao” and La Casa De Papel (Money Heist), Becky G says, “I have always loved ‘La Casa de Papel’ (’Money Heist’) and the way this show connected with millions of people across the world. “Bella Ciao” is an iconic song and marks an important moment in the series, so being asked to reimagine it and be a part of the Casa de Papel world is truly an honor. From recording the song to shooting the video, I hope everyone enjoys this cover as much as I do!”

Multiplatinum, award-winning singer, songwriter, actress and activist Becky G was born for the spotlight and her multifaceted career is shaping up to be nothing short of iconic. The 24-year-old global superstar’s achievements include two number one hits on the Billboard Latin Airplay Charts (“Mayores” & “Sin Pijama”), a starring role in “Power Rangers”, guest-starring in Fox TV’s Emmy-winning “Empire” series, her very own beauty brand Treslúce and Facebook Watch show “Face to Face with Becky G”.

As the granddaughter of Mexican Immigrants, born and raised in Inglewood, California, Becky is no stranger to hardships and is passionate about her community. She uses her massive platform to speak out against inequality and raise awareness on social issues, including Black Lives Matter and DREAMers, and has made it a point to give back to her community along the way.

Becky garnered the Agent of Change award at the 2020 Premios Juventud (Latin Youth Choice Awards) for her activism and using her platform to inspire positive change. In 2019, she accepted the Extraordinary Evolution Award at the 2019 Latin American Music Awards for her success as a young performer who has reached the pinnacle of success in a short period of time. She has also been honored by the Latin Recording Academy as one of the Leading Ladies in Entertainment (2018) and by her home city of Inglewood, California for her contributions to the Hispanic community; she has been recognized as one of Rolling Stone’s “18 Teens Shaking Up Pop Culture” and one of Billboard’s “21 Under 21”.

The multitalented star has hosted a number of prestigious award shows throughout the years including the 2019 European Music Awards (MTV) and the Latin GRAMMY Ellas TV special. In 2020, she hosted and produced her “En La Sala” podcast with Amazon Music – live from her living room during the lockdown. With every episode, Becky donated $10K to a charity of her choice, and spoke to high-profile guests from Vice President-elect Kamala Harris about politics to reggaetón star J Balvin about mental health. She recently premiered her very own Facebook watch show “Face to Face with Becky G” and her first interview was with Demi Lovato.

Her debut album Mala Santa was released in October 2019 and has been certified 8X Platinum in the United States, Platinum in Spain and Gold in Mexico. Click HERE to stream or download the album.

Tokyo is dead. The enemy still lurks in the Bank of Spain, wounded but as dangerous as ever. Facing their darkest hour and greatest challenge yet, the gang hatch a bold plan to get the gold out without anyone noticing. To make matters worse, the Professor makes the biggest mistake of his life.

‘Money Heist is one of the most popular non-English series on Netflix. As just announced recently on Top10.Netflix.com, Parts 3, 4 and 5 are ranked highly in their top 10.’

Netflix is the world’s leading streaming entertainment service with 214 million paid memberships in over 190 countries enjoying TV series, documentaries, feature films and mobile games across a wide variety of genres and languages. Members can watch as much as they want, anytime, anywhere, on any Internet-connected screen. Members can play, pause and resume watching, all without commercials or commitments.