Get your fighting gear ready for the frontlines of battle before going to see “12 Strong!” The nonstop action of this powerful war drama will take you front and center to the true story of the first 12 American soldiers sent in to fight the Taliban after 9/11.

Chris Hemsworth pivots from playing superhero, Thor, to real American hero, Captain Mitch Nelson, the leader of the Special Force Unit that is dropped into Afghanistan shortly after the attacks on the World Trade Center and the Pentagon.  The soldiers must leave the families they love to fight for the country they vowed to protect.  Fortunately for Mr. Hemsworh, having on-screen chemistry with his wife in the film, played by Spanish actress, Elsa Pataky, was no big acting stretch since they have had 7 years and 3 kids together to prep for it.  During a press conference in Los Angeles on January 6, 2018, Hemsworth was asked if he has learned Spanish yet—a reference to one of the scenes where his daughter insists he needs to learn Spanish so he can understand his wife.  Chris quickly responded with an emphatic and slightly sarcastic, “Si!” leaving the media laughing as he was quick to move on to the next question! 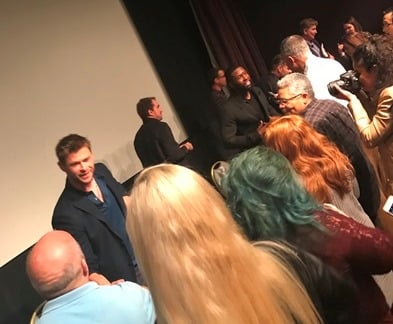 Also contributing to the “12 Strong” Team are actors Michael Peña, star of “The Martian” and “Ant-Man” and Trevante Rhodes of “Moonlight” fame.  In the film, Peña knows how to punch out the witty one-liners that give the intense story some necessary comedy relief.  And Trevante Rhodes shines once again as a man with a tough exterior who also has a big, sensitive heart.  At the press conference, Rhodes spoke on the “honor it was to embody someone who really was a warrior” since “a warrior leads with his heart versus his mind.”

Most captivating about the film is the fact that this actual battle was classified and thus, the soldiers returned home to no fanfare for their heroic triumph.  Bringing their story to the screen allows these real-life superheroes to finally get the recognition they deserve for the role they played in serving their country.  Producer Molly Smith closed out the press conference summarizing the film as “a story of bravery, camaraderie, it’s a story of brotherhood…[and] the triumph of the human spirit.”

Dolly Parton Awarded With Two Guiness Records For Her Accomplishments In Her Music Career
A.CHAL Heading To 2018 CEREMONIA Festival On April 7th