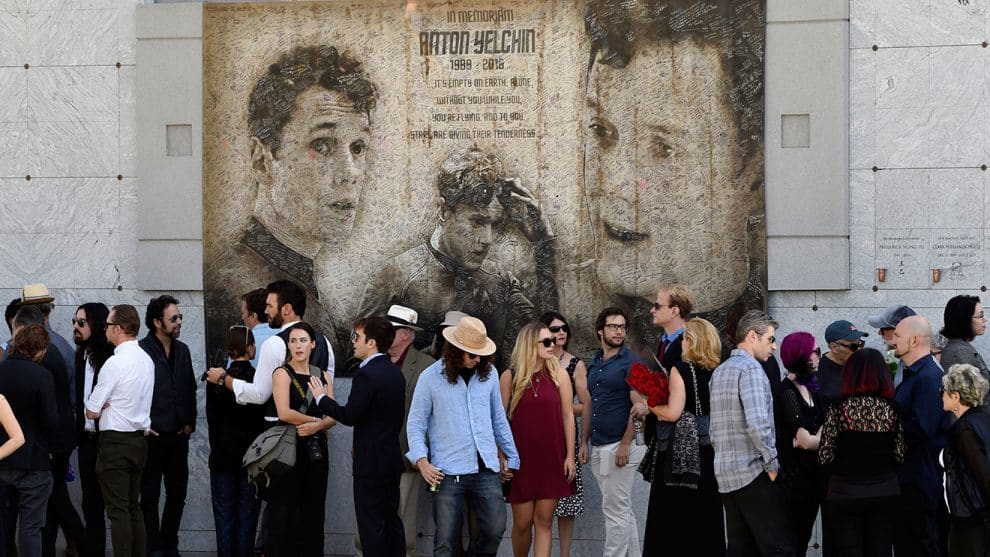 Anton Yelchin was commemorated by his family and costars Sunday in a touching and heartfelt celebration of life at the Hollywood Forever Cemetery in Los Angeles.

The actor, who died at the age of 27 in June 2016 after he was pinned by his own car at his Studio City, California, home, left an unforgettable impression on those who worked with him, such as Zoë Saldana, who starred alongside him in Star Trek.

“It is a bitter sweet moment, because we’re here for Anton, and he’s not here with us,” she said. “But, it alleviates my heart knowing that we’ll keep him alive. We’re going to keep remembering him in the hopes that by practicing all the things he believed in and remembering all the love that he gave us, and all the joy he gave us, we’re able to just keep him here with us.”

Saldana read a chapter on friendship from The Prophet by Kahlil Gibran, saying, “Ever since I read that chapter about friendship, that is the one thing I always try to seek in people, and when I find human beings who truly understand the meaning of friendship, I’m moved and inspired.”

“Anton was one of those people,” she added. “He was an exceptional friend, whether he knew you for five minutes or knew you his whole life. He was just exceptional.” 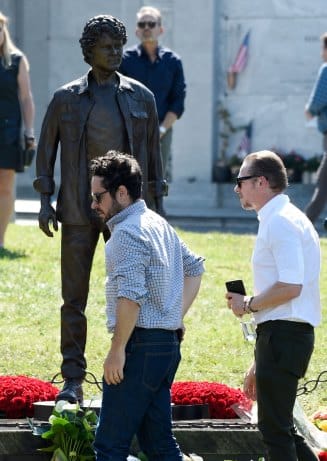 Fred Parnes, who directed Yelchin in 2000’s A Man Is Mostly Water, gave a moving speech about his lifelong friend, saying that while he is deeply saddened the actor is no longer alive, Parnes was determined to live his life in celebration of him.

“I’m here to say that we owe it to Anton to lift our souls evermore, to choose celebration, to choose exaltation and jubilation,” Parnes said. “The longer I live, the more I’m aware of how little I actually know. But I’m absolutely certain that that is what Anton would want. I can hear him say, ‘Yes, dude! Celebrate my life. Do something unexpected in my name, travel the road less taken and then tell me what you found.’”

“That’s what he would want and I refuse to let him down,” he continued. “So, I vow to celebrate his memory and keep his lamp trimmed and burning. To leave a little bit of food on my plate, and a sip of wine in my glass and enjoy the hell out of something every day for him and with him. With our love, he lives on and that is a reason to celebrate.”

Yelchin’s mother, Irina, delivered a speech as well, remembering her son as a “beautiful human being,” and touching on the foundation created in memory of him, the Anton Yelchin Foundation, which helps young artists “who face career challenges due to debilitating disease or disability.”

“We want to keep Anton’s spirit, his legacy, alive for many, many years to come,” she said. “After Anton left, there are only a couple of things left to do. A foundation, photography book and sculpture. We accomplish two by today. The Anton Yelchin Foundation and the statue at Hollywood Forever, so he would be surrounded by the people he admired and to be in the middle of the city that he loved so much.”

She continued, “For next generation visiting Hollywood Forever, they will stop by his statue and wonder, ‘Who is this handsome young man, Anton Yelchin?’ They’ll read about him.”

Irina joked a bit, as well, describing what her son’s reaction would be to his statue: “Were my son to know we were making him a sculpture, he would said, ‘Mama, you’re laughing at me, right?’ and then he’ll say, ‘Oh, only if it makes you feel better.’ ”

A performance of “Lay Down” by Jerry Lawson took place, with guests listening while seated in front of photos of Yelchin.

After the celebration, guests gathered in the Garden of Legends within the cemetery for his statue’s unveiling. Lawrence, who starred with Yelchin in Like Crazy, paid her respects to his parents. Abrams spent some time speaking to Yelchin’s parents, hugging Irina. Voight, who starred with Yelchin in Court of Conscience in 2015, laid flowers at the bottom of the statue, later taking some time to speak to the Yelchins, before shaking their hands and leaving the cemetery.

The actor’s statue was created by sculptor Nick Marra and FX artist Greg Nicotero. The statue is located in the Garden of Legends at the cemetery, just a few steps away from the memorial of singer Chris Cornell.