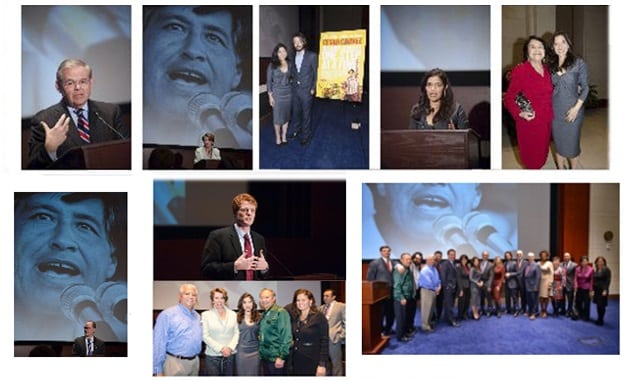 Some of our nation’s most respected leaders took the stage to pay tribute to the life work of Cesar Chavez. Democratic Leader, Rep. Nancy Pelosi; CHCI President & CEO, Esther Aguilera; CHCI Chairman, Rubén Hinojosa; Sen. Robert Menendez; Secretary of Labor, Tom Perez; President of United Farm Workers of America, Arturo S. Rodriguez; President & Chairman of the Cesar Chavez Foundation, Paul F. Chavez; and Rep. Joe Kennedy all delivered powerful remarks about the enduring impact that Cesar Chavez’s work has had on their lives and on the social landscape for Latinos.  The program closed with a few words from Cesar Chavez director, Diego Luna, and actress, America Ferrera, who emphasized the importance of sharing Chavez’s message and story with future generations.’

Chronicling the birth of a modern American movement, Cesar Chavez tells the story of the famed civil rights leader and labor organizer torn between his duties as a husband and father and his commitment to securing a living wage for farm workers. Passionate but soft-spoken, Chavez embraced non-violence as he battled greed and prejudice in his struggle to bring dignity to people. Chavez inspired millions of Americans from all walks of life who never worked on a farm to fight for social justice. His triumphant journey is a remarkable testament to the power of one individual’s ability to change the world.