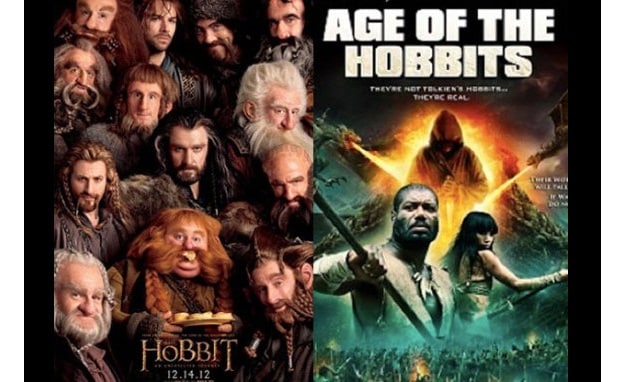 In the case of Hobbit vs. Hobbit, Hobbit wins. (Yeah, that’s pretty confusing, but you’ll understand in a moment.)

A California federal judge has granted Warner Bros.’ motion for a temporary restraining order on Age of the Hobbits, indie film company Asylum’s low-budget rip-off of Peter Jackson‘s The Hobbit: An Unexpected Journey, which hits theaters Dec. 14, according to The Hollywood Reporter.

“The majority of factors weigh in favor of a finding of likelihood of confusion, and no factor weighs against such a finding,” Judge Philip Gutierrez said in the ruling today.

“Moreover, the finding is particularly strong on the three factors that courts have found to be the most important, especially in the context of the Internet: similarity of the marks, relatedness of the goods and use of similar marketing channels.”

Producers of The Hobbit filed the lawsuit last month, accusing them of creating a “knockoff” movie based on J.R.R. Tolkien‘s epic fantasy novel and infringing on their trademark on the word hobbits.

Asylum’s lawyers fired back, claiming their use of hobbits is fair, since it references a term used by archaeologists, not the Tolkien character, but the judge wasn’t having it.

Age of the Hobbits, a film about a “last village of clever, peace-loving Hobbits…attacked and enslaved by Java Men, komodo-worshiping, dragon-riding cannibals,” was scheduled to release tomorrow.