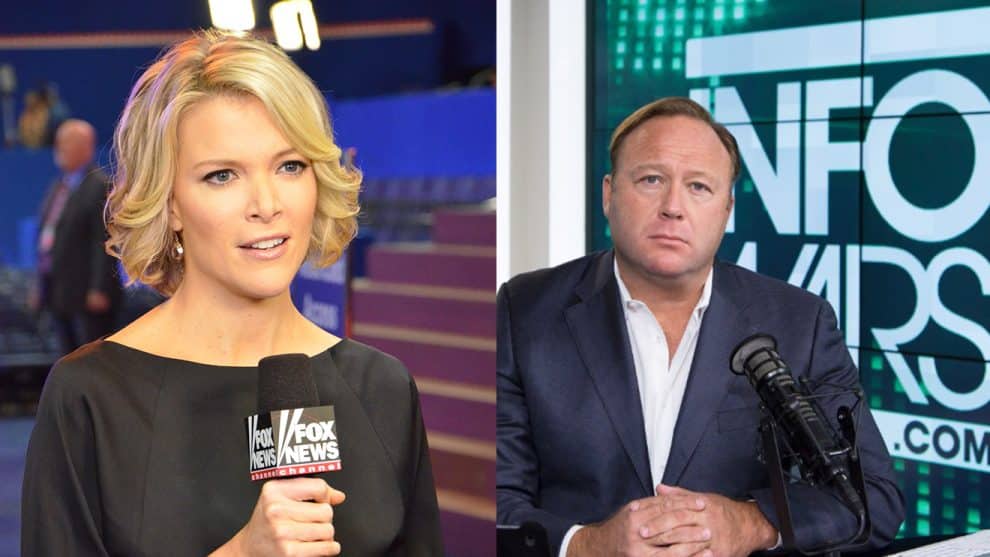 Alex Jones is threatening to scoop NBC and Megyn Kelly with their own interview.

The controversial Infowars host says he’ll release contents of their conversation — which he claims to have recorded — on his website Thursday night. Jones even released a teaser of what appears to be a secretly recorded conversation with Kelly (below).

“I’ve never done this in 22 years, I’ve never recorded another journalist, but I knew it was a fraud, that it was lie,” Jones said in a video posted on Twitter. “God, she was like, ‘I want to get steaks with you, I’m obsessed with you, oh my god,’ wiggling around in her seat. It was all crap. I knew it was all a lie. I said Sandy Hook happened, and she wouldn’t even put it in the promo pieces. So we’re going to release — oh yeah — the pre-interview. And then when they put the fraud out on Sunday — which I’ve asked them not to air because they’re misrepresenting who I am and say I’m as bad as Saddam Hussein… we’ve got the whole interviews here … You’re going to hear what I actually said … it’s all going to come out tonight.”

The tweet was accompanied by an audio recording of what sounds like Kelly assuring Jones her interview would be fair.

“All I can do is give you my word and tell you if there’s one thing about me, I do what I say I’m gonna do, and I don’t double-cross,” she said. “You know you just became very fascinating to me. I just always thought you were this maybe, [y’know] one-dimensional guy, like this is your thing… My goal is for your listeners and the left — you know, who will be watching some on NBC — to say, ‘Wow, that was really interesting.’ And then the next time I wanna get somebody, they’re gonna say, ‘Look what you did to Alex Jones!’ It’s not going to be some gotcha hit piece, I promise you that.”

BC and Infowars did not reply to request to comment.

Families of the victims of the Sandy Hook Elementary School shootings have denounced NBC’s Sunday night interview and have pressured the network to cancel the broadcast.

“What I think we’re doing is journalism,” Kelly has said. “The bottom line is that while it’s not always popular, it’s important. I would submit to you that neither I nor NBC News has elevated Alex Jones in any way. He’s been elevated by 5 or 6 million viewers or listeners, and by the president of the United States. As you know, journalists don’t get the choice over who has power or influence in our country.”