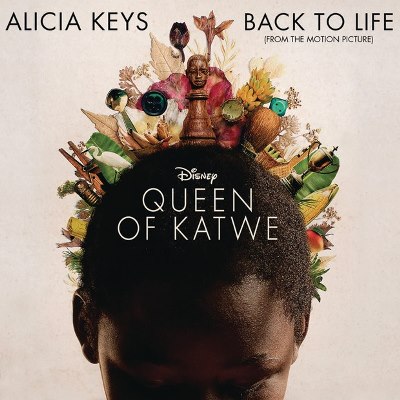 Here is your first look at a featurette featuring singer/songwriter/producer Alicia Keys and her new song “Back to Life,” which is featured in the upcoming film “Queen of Katwe.” The film, which is based on a true story, is the vibrant true story of a young girl from the streets of Uganda whose world rapidly changes when she is introduced to the game of chess starring David Oyelowo, Lupita Nyong’o and newcomer Madina Nalwanga.

Be sure to check out Disney’s “Queen of Katwe” when it opens in theaters September 23, 2016.

The multi-talented singer/songwriter/producer’s new original song, “Back to Life,” appears in the film and on the motion picture soundtrack from Walt Disney Records, which also features the buoyant score from Golden Globe® nominee Alex Heffes (“Mandela: Long Walk to Freedom,” “The Last King of Scotland”). “Back to Life” was written by Alicia Keys, Carlo Montagnese and Billy Walsh and produced by Illangelo and Keys.

“’Queen of Katwe’ moved me in every way,” says Alicia Keys. “The film beautifully depicts Uganda with such honest attention to detail—the colors, the sounds, the people—all vividly brought to life. But most soulfully, it’s the story of this fearless, brilliant girl Phiona who embodies the message that the rise to success first begins with opportunity, and the belief you have in yourself to pursue something bigger. The song ‘Back To Life’ that I wrote for this film alongside collaborators Illangelo and Billy Walsh, is about pushing past that little voice of doubt in our heads so we can instead, electrify the world. When we allow women to find and express their power and potential, the world changes for the better. I encourage people to see this film, be moved by Phiona’s story and then go back into their own communities and encourage a girl who will rise like a flower that breaks through the concrete to see the sun!”

The film’s Academy Award®-nominated director Mira Nair (“Salaam Bombay!,” “Mississippi Masala”) says, “I have carried a torch for Alicia Key’s voice and passionate engagement with the world for years, so it was exciting to have her artistry join ‘Queen of Katwe,’ which celebrates the idea that genius is everywhere!”

“Queen of Katwe,” which will have its world premiere at the Toronto Film Festival on September 10, is directed by Nair from a screenplay by William Wheeler and stars Golden Globe® nominee David Oyelowo, Oscar® winner and Tony® nominee Lupita Nyong’o and newcomer Madina Nalwanga. The film is based on the vibrant true story of Phiona Mutesi, a young girl from the streets of rural Uganda who is introduced to the game of chess by Robert Katende, a former missionary and soccer coach, and goes on to become an international chess champion.