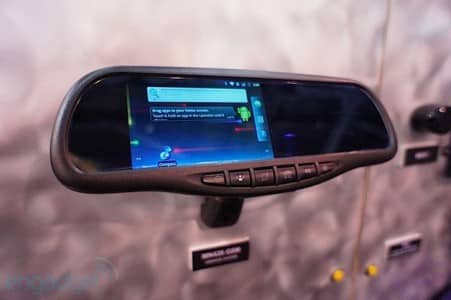 Just when you thought manufacturers couldn’t cram any more technology into a vehicle, CES rolls through Las Vegas to show off all-new levels of car-bound gadgetry. A company by the name of Rydeen hopes to produce a new range of stereo head units that run the Android operating system. The double-DIN units partner up with a touch-screen enabled rear-view mirror serve up all of the relevant applications we’ve come to know and love from our Android devices. Currently, Rydeen says it’s just using the touchscreen rear-view mirrors as research tools, though a production version may hit the market by 2013.

That version will likely boast a more simple interface that should be easier for drivers to use without killing everyone else on the road. We’re big fans of that plan, though we have to wonder about the viability of putting the touch screen in the rear-view mirror to begin with. Here’s hoping Rydeen will turn to a traditional dash-mounted system in the future. Hit the jump to check out a video of the mirror for yourself.