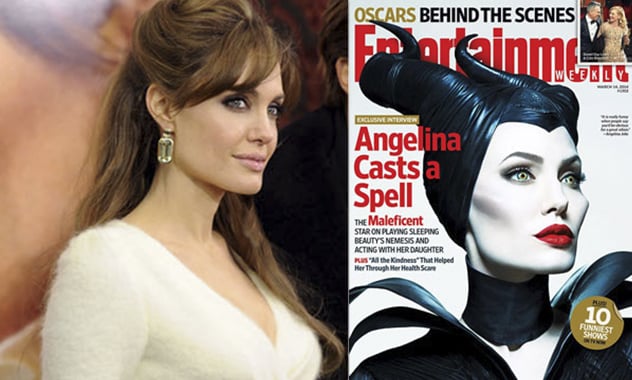 When Angelina Jolie told her kids she was thinking of playing the live-action version of Sleeping Beauty’s villainess in Maleficent, her six children all had the same response: NO!

“They went, ‘She’s so scary!’” Jolie tells EW this week, in her first in-depth interview about the film (out May 30).

Only Vivienne, one of her and Brad Pitt’s youngest children, proved not to be scared by the intimidating black horns and icy cackle. The now-5-year-old even ended up playing a young version of Princess Aurora in the film (as seen in this exclusive new image). But that casting was done more out of necessity than ambition.

“We think it’s fun for our kids to have cameos and join us on set, but not to be actors. That’s not our goal for Brad and I at all,” Jolie says. “But the other 3- and 4-year-old [performers] wouldn’t come near me. It had to be a child that liked me and wasn’t afraid of my horns and my eyes and my claws. So it had to be Viv.”

To convince her brood of little ones that mom should take the part, the actress says she gathered them together for story time to explain the fantasy film’s take on the self-proclaimed “Mistress of All Evil.” By the time she detailed the character’s new origin, there was definitely sympathy for this devil.

“I said, ‘Let me tell you the real story but you can’t tell anybody,’” she recalls. “So this was my test too, like any parent. The next day, I heard Shiloh getting into a fight with another kid, defending Maleficent, saying, ‘You don’t understand her!’ They got into a bit of an argument and I thought, that’s the reason to do the film.”

It’s not that Maleficent is justified, but this story shows how she became misguided. “When that character makes mistakes — which Maleficent does, and crosses many lines — you want them to be angry at her and concerned and confused and in the end, somehow understand something that they didn’t know before,” Jolie says.

It still took awhile for the older kids to get used to her malevolent new appearance, though.

“When Pax saw me for the first time, he ran away and got upset — and I thought he was kidding, so I was pretending to chase him until I actually found him crying,” Jolie says. “I had to take off pieces [of the makeup] in front of him to show him it was all fake and not freak out so much.”

Eventually they got used to it. Pax and Zahara also turn up as extras in the famous christening scene, when Maleficent appears to place the sleeping curse on the kingdom’s infant princess. “I had to walk by them being very mean,” Jolie says. “Of course, I wanted to stop and wink at them.”