Vivienne Jolie-Pitt, get ready for your close-up.

Disney confirmed the news, announcing that Viv will play the child version of Elle Fanning‘s character Princess Aurora in the flick, a 3-D reworking of 1959’s Sleeping Beauty that explores the origins of the Mouse House’s iconic villain, Maleficent.

Jolie plays the titular sorceress who casts a spell on Aurora, so the probability that Angie and Vivienne will act in the same scene together is pretty high, if not a fate accompli, while the fantasy continues shooting in the U.K.

Regarding the casting, a source close to the 37-year-old Oscar winner told Britain’s The Sun that “Ange thought it would be a fun experience for her and Viv to share, and Viv is a natural.”

Perhaps it shouldn’t be a surprise then if Viv’s twin brother, Knox, clamors for a part as well, not to mention big sibs Shiloh, Pax, Zahara and Maddox.

Though, Shiloh doesn’t have much to complain about as she had a cameo as Pitt’s big-screen daughter in 2008’s The Curious Case of Benjamin Button. 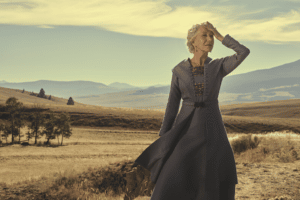