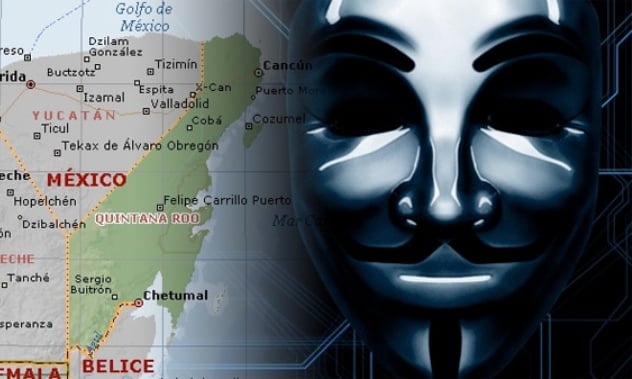 Well-known hacktivist group Anonymous has initiated #OpDragon, an operation designed as a protest against the construction of Dragon Mart Cancún.

The cyber attack began Monday morning and has targeted many of Quintana Roo’s government websites as well as Dragon Mart sites.  Quintana Roo’s main portal held up against the attack that was announced last week but Anonymous recently announced on Twitter that it was finally brought down as well.

Other sites that were also hacked are puertovallartagalacongresos.com and  gobernadormerida.com.mx, where a message was posted saying that Anonymous has the private information of over 25,000 Dragon Mart users and that “this is just a warning.”

Good day DRAGONMART, we have in our power a database of all your clients, we don’t want to be rude but GET OUT OF MEXICO!!! We invite you to get off our land and our beautiful country, we will publish your stupid security data we have in our power over 80,000 Pay Pal records that buy on your Online store and we leave you with proof of the trust that your clients deposited in you in 2012, logins, passwords, this is the power of the hive, it’s not a root, not a deface, it’s a warning, get out!!! or this will get ugly!!…………….=)

Many have spoken out against the construction of the huge commercial center announced early last year, reports the Wall Street Journal. They believe it will take business away from the locals and could harm a coral reef nearby.