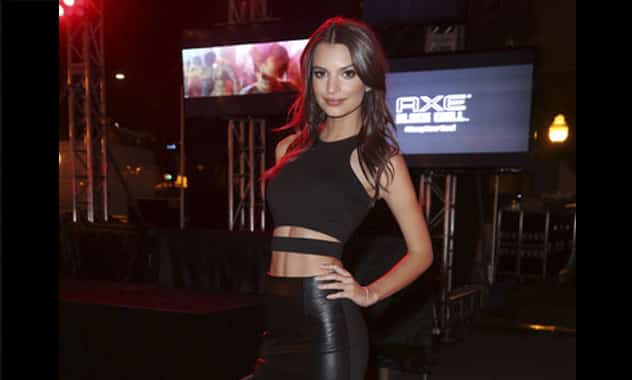 Last night, girls and super-heroines alike raised temperatures throughout San Diego at Comic Con ’13. At the weekend’s most sizzling event, Playboy and Universal Pictures’ “Kick-Ass 2” party, sponsored by AXE Black Chill™, a red hot stunt revealed how the style of the comic book girl has evolved throughout the ages – becoming hotter and more badass with each decade – with a special appearance from the sexiest girl of the summer, supermodel Emily Ratajkowski.

The comic-book girl stunt coincided with the official launch of the AXE Black Chill™ collection – designed to help guys keep their cool as leading ladies from video games, sports, movies, and all areas of guys’ lives continue to get hotter throughout the decades.

Showcasing how female comic book characters have progressed throughout the years, a team of super-heroines lit up last night’s party with an action-packed flash of flames, zip lines, and heat. These fierce girls displayed a look from each comic era – from the Golden Age of pleated skirts, tights and pumps with Americana flair, to the Silver Age of daring headpieces, thigh-high boots and short shorts. The most recent era, the Modern Age, brought guys and comic fans to a boiling point, as the super-heroines debuted curve-hugging body suits and lots of skin.

Burning up the showcase finale, supermodel Emily Ratajkowski presented the AXE Black Chill™ collection as a solution to cool down party goers while she and her fellow heroines spiced up the night. Ratajkowski, who most recently starred in Robin Thicke’s Blurred Lines music video stated, “In a time when girls are getting hotter, AXE Black Chill™ is the perfect wingman to help guys keep their cool.” Ratajkowski went on to say, “Confidence is sexy. We need guys to relax, chill out and just have a good time.”

Emily isn’t the only girl who thinks confidence is key. A recent survey1 conducted by AXE found that 80% of girls feel it’s important for guys to keep cool and confident around the girls they find attractive. The survey also revealed speechlessness, avoidance of eye contact, and fumbling were the top nervous symptoms guys ages 18-24 experience around attractive girls. AXE decided it was time to offer the solution.

“The most recent AXE survey found that 3 out of every 5 guys would feel more attractive to girls if they smelled nice and were well-groomed, so we’re excited to provide guys with AXE Black Chill™,” said Matthew McCarthy, Director of Brand Building for AXE. “We are always looking to help our guy become more cool and confident, which in turn, will help light a spark between him and his super-heroine.”