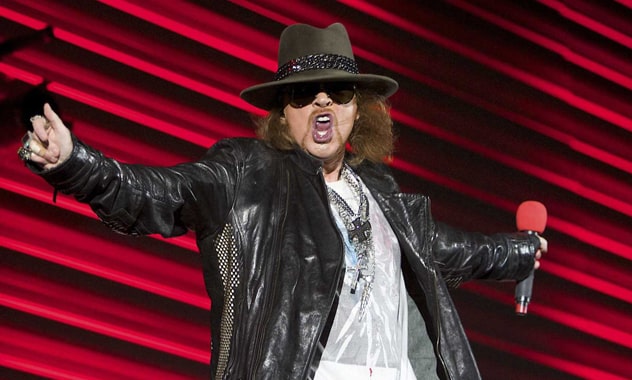 Axl Rose announced Wednesday that he won’t be showing up to see the band inducted into the Rock and Roll Hall of Fame and declined the honor for himself.

In a letter to the hall, band fans and “To Whom It May Concern,” Rose listed several reasons for not attending Saturday’s ceremony in Cleveland, including a feeling that the hall does not respect him.

In declining his own induction, he added: “I strongly request that I not be inducted in absentia and please know that no one is authorized nor may anyone be permitted to accept any induction for me or speak on my behalf.”

The hall said in a statement that it still plans to induct Rose with the rest of the group. “We are sorry he will not be able to accept his induction in person,” it said.

According to the rock hall only the Sex Pistols have declined induction before.

Although Rose now fronts a reconstituted version of Guns N’ Roses that does not include former members Slash, Izzy Stradlin, Duff McKagan or Steven Adler, some held out hope that the band might reunite at the hall.

Even Slash seemed to leave an opening for the possibility.

“I have no idea what’s going to happen on that day,” he said in an interview with The Associated Press last month. “It’s more like going into it with blinders on and just see what happens.”

“There’s a seemingly endless amount of revisionism and fantasies out there for the sake of self-promotion and business opportunities masking the actual realities,” he wrote.

He added: “So let sleeping dogs lie or lying dogs sleep or whatever. Time to move on. People get divorced. Life doesn’t owe you your own personal happy ending especially at another’s, or in this case several others’, expense.”

A rep for Slash said he would still attend Saturday but had no further comment. Green Day is scheduled to induct the group.

Rose admitted that when it was first announced that the band would be inducted, he had mixed feelings. But “I was honored, excited and hoped that somehow this would be a good thing. Of course, if Guns N’ Roses were to be inducted it’d be somewhat of a complicated or awkward situation.”

Rose’s announcement cast a cloud over the band’s induction but in some ways was fitting, given the dysfunction that marked the group as it became one of the world’s most popular acts in the 1980s and 1990s. Its hits included “Welcome to the Jungle,” “Sweet Child O’ Mine” and “November Rain.”