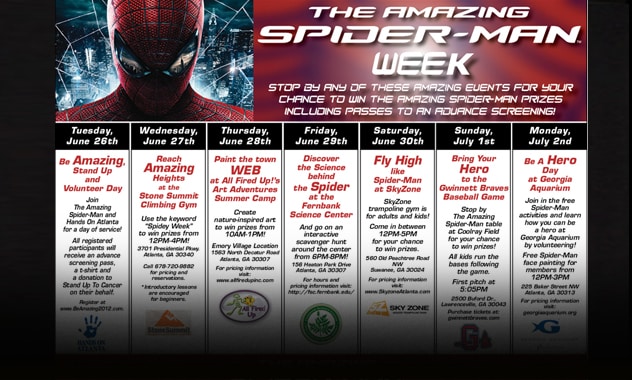 WHO:                   Join Sony Pictures Entertainment and the Miami-Dade Parks, Recreation and Open Spaces Department to celebrate the hero in all of us by volunteering on The Amazing Spider-Man™ “Be Amazing, Stand Up and Volunteer” Day. On Tuesday, June 26th, people of all ages in cities across the country will come together to give their time and energy to help their neighbors – and the day will support Stand Up To Cancer, which funds accelerated and innovative cancer research. Miami residents can log on to www.BeAmazing2012.com to find out more information on the initiative in Miami and nationwide.

WHAT:             Miami’s “Be Amazing, Stand Up and Volunteer” opportunities are highlighted by a beautification project at the AD “Doug” Barnes Park.  Activities at the park include painting, landscaping and mulching walkways throughout the park.  Materials will be provided.

In honor of the volunteers, Sony Pictures will make a donation to Stand Up To Cancer (SU2C), an organization very close to one of the producers of the film, Laura Ziskin. A founding member of SU2C, Laura lost her battle with cancer in 2011. Registered Miami volunteers will also receive advance screening passes to see The Amazing Spider-Man™ before it arrives in theaters on July 3rd and a “Be Amazing, Stand Up and Volunteer” t-shirt. Registration for all volunteer opportunities will be hosted online by the Miami-Dade Parks and Recreation department, http://www.miamidade.gov/parks/about-volunteering.asp.

About The Amazing Spider-Man™:

One of the world’s most popular characters is back on the big screen as a new chapter in the Spider-Man legacy is revealed in The Amazing Spider-Man™.  Focusing on an untold story that tells a different side of the Peter Parker story, the new film stars Andrew Garfield, Emma Stone, Rhys Ifans, Denis Leary, Campbell Scott, Irrfan Khan, with Martin Sheen and Sally Field.  The film is directed by Marc Webb from a screenplay written by James Vanderbilt and Alvin Sargent and Steve Kloves from a story by James Vanderbilt, based on the Marvel Comic Book by Stan Lee and Steve Ditko.  Laura Ziskin, Avi Arad, and Matt Tolmach are producing the film in association with Marvel Entertainment for Columbia Pictures, which will open in theaters everywhere in 3D on July 3, 2012.

The Amazing Spider-Man is the story of Peter Parker (Garfield), an outcast high schooler who was abandoned by his parents as a boy, leaving him to be raised by his Uncle Ben (Sheen) and Aunt May (Field).  Like most teenagers, Peter is trying to figure out who he is and how he got to be the person he is today.  Peter is also finding his way with his first high school crush, Gwen Stacy (Stone), and together, they struggle with love, commitment, and secrets.  As Peter discovers a mysterious briefcase that belonged to his father, he begins a quest to understand his parents’ disappearance – leading him directly to Oscorp and the lab of Dr. Curt Connors (Ifans), his father’s former partner.  As Spider-Man is set on a collision course with Connors’ alter-ego, The Lizard, Peter will make life-altering choices to use his powers and shape his destiny to become a hero.

About Stand Up 2 Cancer:

Stand Up To Cancer (SU2C)—a program of the Entertainment Industry Foundation (EIF), a 501(c)(3) charitable organization—raises funds to accelerate the pace of groundbreaking translational research that can get new therapies to patients quickly and save lives. SU2C facilitates collaboration among the best and the brightest in the cancer research community. The American Association for Cancer Research (AACR) and a Scientific Advisory Committee led by Nobel Laureate Phillip A. Sharp, Ph.D., conduct rigorous, competitive review processes through which SU2C’s grantees are selected. By galvanizing the entertainment industry, SU2C generates awareness and builds grassroots support for this new approach to ending cancer.

Members of the SU2C Executive Leadership Council include Katie Couric; the Entertainment Industry Foundation, represented by Board of Directors Chairperson Sherry Lansing (Founder of the Sherry Lansing Foundation), CEO Lisa Paulsen and Senior Vice President Kathleen Lobb; Rusty Robertson and Sue Schwartz of the Robertson Schwartz Agency; Pam Williams, President of Laura Ziskin Productions; and nonprofit executive Ellen Ziffren. The late Laura Ziskin, a legendary film producer who executive produced the 2008 and 2010 SU2C telecasts, was also a co-founder of Stand Up To Cancer.

About the Parks Foundation of Miami-Dade:

The Parks Foundation of Miami-Dade is a non-profit 501(c)3 organization supporting the Miami-Dade Parks, Recreation and Open Spaces Department’s efforts to further develop Miami-Dade County’s world-class parks system for residents and visitors.  Its mission is to create a healthier, more livable and sustainable Miami community by ensuring the implementation of the Parks Open Space Master Plan and the development of year-round park and recreation programs for local children, adults and people with disabilities.

Monies raised through membership and fundraising efforts help fund: scholarships for disadvantaged children to attend after-school and summer camp programs; recreational and community programs, such as disability services and health and wellness initiatives for people of all ages; and Parks Open Space Master Plan initiatives, such as the development of trailways, bikeways and safe access to parks and open spaces throughout Miami. For more information on the Parks Foundation, please visit www.parksfoundationofmiami-dade.com.

About the Miami-Dade Parks, Recreation and Open Spaces Department:

Nationally accredited, a three-time winner of the NRPA National Gold Medal Award and winner of the 2009 Florida Governor’s Sterling Award for excellence in management and operations, Miami-Dade Parks is the third largest county park system in the United States, consisting of 260 parks and 12,825 acres of land.  It is one of the most unique park and recreation systems in the world.  Made up of more than just playgrounds and athletic fields, it also comprises out-of-school, sports-development, and summer-camp programs; programs for seniors and people with disabilities; educational nature centers and nature preserves; environmental restoration efforts; arts and culture programs and events; the renowned Zoo Miami and the Deering Estate at Cutler; the Crandon Tennis Center, home of the Sony Ericsson Open; golf courses; beaches; marinas; campgrounds; pools; and more