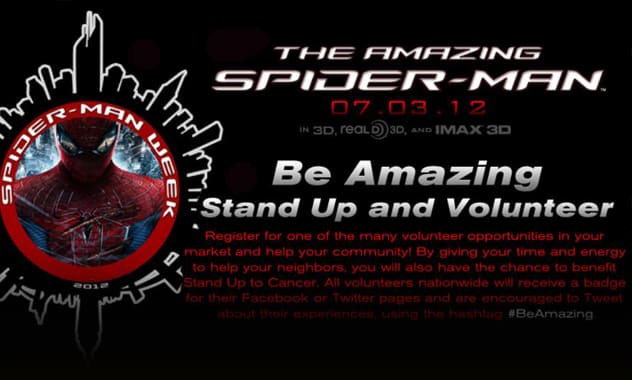 – In the highly anticipated movie The Amazing Spider-Man™, in theaters July 3, 2012, Peter Parker finds that being a hero isn’t about having super powers – it is about how he chooses to use those powers.  On Tuesday, June 26, Americans all across the country will discover the same thing as Sony Pictures Entertainment’s program “Be Amazing, Stand Up and Volunteer” celebrates the hero in all of us.  On that day, people of all ages in cities across the country will come together to give their time and energy to help their neighbors – and the day will support Stand Up To Cancer, which funds accelerated and innovative cancer research.

For this nationwide day of volunteering, people of all ages in Los Angeles, New York, San Francisco, Chicago, Dallas, Philadelphia, Washington DC, Houston, Miami, and Atlanta can log on to www.BeAmazing2012.com to register for specific volunteer activities in their area.  There will be a wide range of volunteer opportunities in each city and some way for everyone to help their community.  For example, in New York, volunteers will be able to help out at the Brooklyn Bridge Park Conservancy, or a children’s program at Common Cents in Staten Island, or a community garden in the Bronx, or lend a hand to the Leary Firefighters Foundation, among other projects.  On the day of the event, with the support of NYC Service, the cast of the film, including Andrew Garfield, Emma Stone, Rhys Ifans, and Denis Leary, will join thousands of New Yorkers to volunteer at locations throughout all five boroughs.

In honor of the volunteers, Sony Pictures will make a donation to Stand Up To Cancer.  People who are not able to volunteer can also find links to donate to Stand Up To Cancer at the www.BeAmazing2012.com site.  All volunteers nationwide will receive a badge for their Facebook or Twitter profiles and will be encouraged to Tweet about their experiences, using the hashtag #BeAmazing.

On the evening of June 25, the night before the event, the cast of the film will light up the Empire State Building to spread the word about the event and to encourage people to come out and volunteer.

Laura Ziskin, the legendary film producer who executive produced the 2008 and 2010 Stand Up To Cancer telecasts, also produced three Spider-Man features, the last of which became the highest-grossing film in Sony Pictures’ history. At the time of her death in June 2011, she was at work on The Amazing Spider-Man. As one of the co-founders of SU2C whose life was taken by cancer in 2011, she helped shape the movement, ensuring that the patient’s perspective was always front and center.

“We are so grateful to Sony for choosing Stand Up To Cancer as the beneficiary of this remarkable event,” said SU2C Executive Leadership Council member Pam Williams.  “SU2C is a grassroots movement, and the notion that each and every individual can make a difference is one of our core convictions. Laura would be so proud to see how this film is helping reinforce that message.”

In addition to this collaboration, Stand Up To Cancer has teamed up with The AmazingSpider-Man to produce a line of special co-branded t-shirts that will help raise awareness and support for innovative cancer research. The exclusive designs feature both the iconicThe Amazing Spider-Man artwork and hero message to encourage people to take action against this devastating disease.

One of the world’s most popular characters is back on the big screen as a new chapter in the Spider-Man legacy is revealed in The Amazing Spider-Man™.  Focusing on an untold story that tells a different side of the Peter Parker story, the new film stars Andrew Garfield, Emma Stone, Rhys Ifans, Denis Leary, Campbell Scott, Irrfan Khan, with Martin Sheen and Sally Field.  The film is directed by Marc Webb from a screenplay written by James Vanderbilt and Alvin Sargent and Steve Kloves from a story by James Vanderbilt, based on the Marvel Comic Book by Stan Lee and Steve Ditko.  Laura Ziskin, Avi Arad, and Matt Tolmach are producing the film in association with Marvel Entertainment for Columbia Pictures, which will open in theaters everywhere in 3D on July 3, 2012.  The Amazing Spider-Man is the story of Peter Parker (Garfield), an outcast high schooler who was abandoned by his parents as a boy, leaving him to be raised by his Uncle Ben (Sheen) and Aunt May (Field).  Like most teenagers, Peter is trying to figure out who he is and how he got to be the person he is today.  Peter is also finding his way with his first high school crush, Gwen Stacy (Stone), and together, they struggle with love, commitment, and secrets.  As Peter discovers a mysterious briefcase that belonged to his father, he begins a quest to understand his parents’ disappearance – leading him directly to Oscorp and the lab of Dr. Curt Connors (Ifans), his father’s former partner.  As Spider-Man is set on a collision course with Connors’ alter-ego, The Lizard, Peter will make life-altering choices to use his powers and shape his destiny to become a hero.

About Stand Up To Cancer

Stand Up To Cancer (SU2C)—a program of the Entertainment Industry Foundation (EIF), a 501(c)(3) charitable organization—raises funds to accelerate the pace of groundbreaking translational research that can get new therapies to patients quickly and save lives. SU2C facilitates collaboration among the best and the brightest in the cancer research community. The American Association for Cancer Research (AACR) and a Scientific Advisory Committee led by Nobel Laureate Phillip A. Sharp, Ph.D., conduct rigorous, competitive review processes through which SU2C’s grantees are selected. By galvanizing the entertainment industry, SU2C generates awareness and builds grassroots support for this new approach to ending cancer.

Members of the SU2C Executive Leadership Council include Katie Couric; the Entertainment Industry Foundation, represented by Board of Directors Chairperson Sherry Lansing (Founder of the Sherry Lansing Foundation), CEO Lisa Paulsen and Senior Vice President Kathleen Lobb; Rusty Robertson and Sue Schwartz of the Robertson Schwartz Agency; Pam Williams, President of Laura Ziskin Productions; and nonprofit executive Ellen Ziffren. The late Laura Ziskin, a legendary film producer who executive produced the 2008 and 2010 SU2C telecasts, was also a co-founder of Stand Up To Cancer.