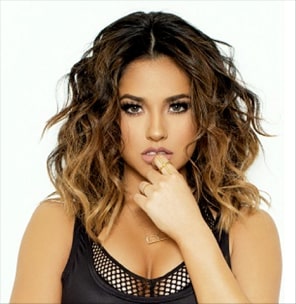 Upon its premiere, the single debuted at #1 in digital stores and was featured by the likes of Billboard, E! Online Latino, and many more.

“Sola” marks Becky G‘s formal Latin debut single released via Kemosabe / RCA Records / Sony Music Latin. Her instantly recognizable voice and dynamic lyrical content drive the song as she carries an infectious hook over sexy and soulful production by long time friend and collaborator A.C. It’s the perfect introduction to her latest musical evolution and lifelong influences. Moreover, she emerges as a voice for bicultural millennials, embracing her heritage and singing in Spanish. She’s no stranger to Latin audiences either, achieving her first #1 on the Latin Billboard Charts with “Can’t Get Enough” [feat. Pitbull].

On June 26, she joined Pitbull for a performance of “Superstar” at the Copa America Centenario Final Match. Next up, she’s scheduled to perform at Premios Juventud in Miami on Thursday, July 14. Becky G was recently cast as Trini, the Yellow Ranger in Lionsgate’s upcoming film, Saban’s Power Rangers.

With “Sola” as the first step, Becky G stands poised to skyrocket to the top of Latin music in 2016 with her forthcoming Spanish-Language album on the horizon. In a category dominated by her male counterparts, Becky G hopes to empower and celebrate femininity, commenting, “Sola is about being good on your own as a woman. It’s about self-love. I am fortunate enough to have a strong support system around me and I want to be able to share the knowledge that they’ve instilled in me with my fans.”

ABOUT BECKY G:
Born in Inglewood, CA to Mexican-American parents, Becky G drew early inspiration from the likes of Jennifer Lopez, Christina Aguilera, and Thalía, teaching herself to write and record music at a young age. After years of quietly developing her sound, she found international success with the double-platinum smash “Shower” in 2014. By the age of 19, she placed among Rolling Stone’s “18 Teens Shaking Up Pop Culture” and achieved her first Billboard Latin #1 hit with “Can’t Get Enough” [feat. Pitbull]. Signed to Kemosabe / RCA, she holds the distinction of being one of Cover Girl’s youngest faces and guest-starred on Fox’s Emmy Award-winning Empire. Along the way, she’s toured with Demi Lovato, Katy Perry, Jason Derulo, and J Balvin.