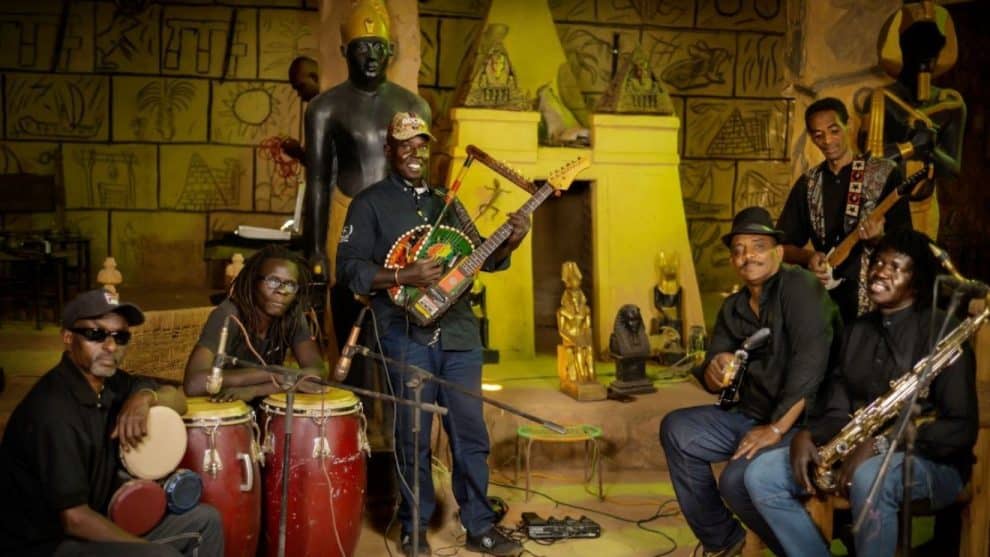 This album is a soundtrack of Sudan’s revolution.

In late 2021, Ostinato Records returned to Khartoum, Sudan shortly after a November military coup and country-wide protests to capture the sound of an ongoing, inspiring democratic revolution that began in 2019.

Scrolling Sudanese Tik Tok, we scouted a mysterious band in Port Sudan, a city on the Red Sea coast and the country’s biggest port. One short social media video opened the gates into a world few have ventured, let alone heard, a world that reorients our understanding of ancient history and politically empowers the present.

In the early 1990s, a young musician named Noori ventured near the scrap yards of Port Sudan only to find the well-preserved neck of a guitar, an uncommon instrument in these parts.

He was later gifted a vintage tambour from the ‘70s, a traditional four-string instrument strummed across the region, by his father, a renowned instrumentalist. Using his own special technique of welding and tuning, Noori forged the two and gave birth to an electrified tambo-guitar, the only hybrid of its kind in existence.

Then only 18, Noori was driven by a passionate cause to keep Beja (pronounced Bee-Jah) music alive and fresh. Beja culture is little known—for very deliberate reasons. Their land in eastern Sudan by the Red Sea is blessed and cursed with vast deposits of gold, largely sold off to foreign companies. Successive Sudanese governments have turned a blind eye to Beja calls for recognition and access to the mined wealth of their own soil.
Under the harsh rule of Sudan’s former strongman, Omar al-Bashir, a campaign was waged to erase Beja language, music, and culture, and deny the right to a dignified livelihood. Their conditions have changed little since Bashir’s ouster in 2019.

The Beja community has been on the forefront of political change in Sudan for decades and Noori believes an unleashing of Beja music would form the most potent act of resistance, in line with the rebellious closure Sudan’s biggest port, a regular demonstration of civil disobedience by Beja activists in their quest for equity and justice.

Few older Beja recordings were produced. Even fewer, if any, remain. This is the first ever international release of the Beja sound, a six-track portal to another time and place, of melodies long forgotten and never before interpreted by an electric and brass-driven ensemble. Beja Power! is a living archive of the finest, most heartfelt Beja songs—each composed at a different stage in its long history, each in its own world.

A truly ancient community, Beja trace their ancestry back millennia. Some historians say they are among the living descendants of Ancient Egypt and the Kingdom of Kush. They are even depicted in the hieroglyphics.

Beja melodies—nostalgic, hopeful and sweet, ambiguous and honest—are thousands of years old, which explains an evocative composition like “Qwal” and the mystifying, regal imagery of the pharaoh’s courts it conjures. Yet, somehow, their sounds are also reminiscent of Dick Dale’s 1963 “Misirlou” and jazz great Charlie Rouse’s 1968 “Meci Bon Dieu”.

This album could be 6,000 years, 60 years, or 6 months old and the only difference would be the instruments used—and only a truly special instrument is worthy of the Beja cause: Noori’s tambo-guitar. Along with his Dorpa Band, formed in 2006, their instrumental Beja music forms the latest link in an unbroken chain of an inherited, arresting sound that is local as it is global, a gift of a storied past and the exchanges of the well-traveled, fabled Red Sea.

Electric soul, blues, jazz, rock, surf, even hints of country, speak fluently to styles and chords that could be Tuareg, Ethiopian, Peruvian or Thai—all grounded by hypnotic Sudanese grooves and Naji’s impeccable, airy tenor sax. The world is quite literally housed in Beja music.

Ostinato Records is honored to bring the nearly forgotten Beja sound in all its nostalgia, sweetness, honesty, and power, recorded and mastered to maintain the warmth of Sudan’s signature aesthetic, to your sound system.

This album is a testament to music’s timeless ability to realign the world’s ear and heart towards a long marginalized people’s enduring struggle, ensuring Beja culture, their true gold, is never again discarded to the scrap heaps of its own country or history. There is, as the track “Al Amal” translates in English, hope.