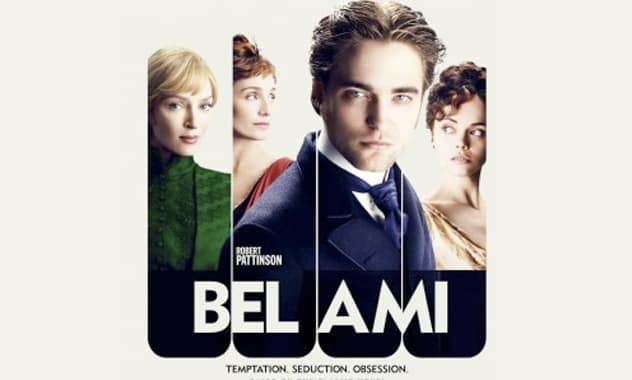 If you thought Robert Pattinson sexed  things up as a cold-blooded undead vampire, wait’ll you get a load of him as a  red-blooded, so-not-dead social vampire preying—and sleeping—his way through  Paris society!

The U.S. trailer of the star’s upcoming flick, Bel Ami, has hit the  Web, and that thud, thud, thud! you just heard is the collective fainting of R.Pattz fanatics everywhere, OD’ing on images of the star  getting his horndogginess on with the film’s three beguiling lead actresses.

You sitting down? Good, then let’s take a look…

The period drama is based on Guy de Maupassant‘s lusty 1885  novel about an upstart journalist in late 19th-century France whose trysts with  a series of women help him claw his way to the top of French society.

You know what else is filthy? Duroy’s sexual mores! One by one, he makes his  way through the film’s three actresses—Kristin Scott Thomas, Christina  Ricci and Uma Thurman—amidst sumptuous  salons and lush soirées.

“The most important people in Paris are not the men, but their wives,”  Thurman’s character says, and indeed Duroy seems to have gotten the message.

Cue some ruffled sheets, passionate kisses, tragic heartaches and—finally—a  glamour shot of R.Pattz stepping out into the light, and then bang! R.Pattz drives yet another nail into his reluctant-sex-symbol coffin.

Bel Ami will be available on iTunes and on video on demand May 4,  and arrives in theaters June 8.