Rob Minkoff, director of The Lion King and Stuart Little, will produce the animated comedy together with Yair Landau and Susan Purcell. Landau’s Mass Animation shingle is producing with Huayi Brothers Media Corporation, Flying Tigers Entertainment and GFM Films, which is handling international sales at AFM. 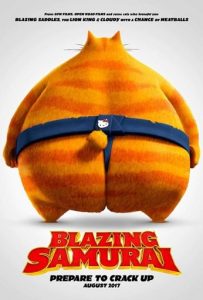 Open Road Films has picked up U.S. rights to Blazing Samurai and plans a domestic bow on August 4, 2017. Sony Pictures International Releasing has picked up several territories and Huayi Brothers is distributing the film in Greater China. GFM Films is selling worldwide rights to buyers at AFM.

Cera will play Hank, a dog who dreams of becoming a great warrior and saving the town of Kakamucho from becoming the litter box of a nefarious feline warlord. Jackson will voice Jimbo, a once-great cat samurai who has been hitting the catnip too hard for too long. He takes Hank under his wing and teaches him the way of the samurai. Brooks will voice Shogun, a misguided but benevolent leader.

Helmers Mark Koetsier (Kung Fu Panda) and Chris Bailey (Alvin and the Chipmunks) will direct from a screenplay by Ed Stone and Nate Hopper.

“There is no business like Shogun business,” quipped Brooks. The comedy legend will attend AFM Nov. 4 to showcase footage from Blazing Samurai to buyers, along with Minkoff and Landau.

“Throughout the recording sessions from Mel Brooks to Mel B, this cast has not only met the humor, but raised the level of comedy and heart in this unique homage to Blazing Saddles,” said Landau. “Ed and Nate delivered a first-rate script in Blazing Samurai, a story about cats and dogs getting along that will appeal to everyone whether they’ve seen the original comedy classic or not.”

Brooks is executive producing Blazing Samurai along with Reginald Hudlin and Pietro Ventani.