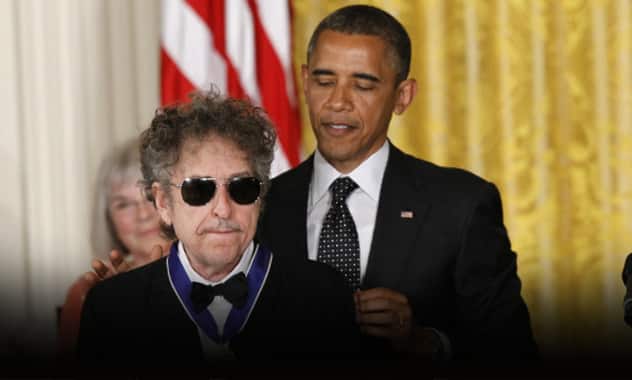 Yesterday the legendary musician Bob Dylan visited the White House to receive the Medal of Freedom, the US’s highest civilian honor. Earlier this year, the White House announced that Dylanwould be one of this year’s recipients, stating that he had “considerable influence on the civil rights movement of the 1960’s and has had a significant impact on the American culture over the past five decades.”

The Medal of Freedom is bestowed by the President of the United States to those individuals who have made “an especially meritorious contribution to the security or national interests of the United States, world peace, cultural or other significant public or private endeavors.” At the ceremony yesterday, President Obama commended Dylan on his music, saying,

“Today, everybody from Bruce Springsteen to U2 owes Bob a debt of gratitude.  There is not a bigger giant in the history of American music.  All these years later, he’s still chasing that sound, still searching for a little bit of truth. And I have to say that I am a really big fan.”

Dylan was one of 13 to receive the Medal of Freedom today, among others such as author Toni Morrison, astronaut John Glenn, and Israeli President Shimon Peres. Although Obama admitted to being a fan since college in his speech, this is hardly the first award Dylan has received for his literary merits.

In his 50 plus years of recording music, there have been dozens of documentaries and books written to analyze the artist and his lyrics. Several colleges offer entire courses on his writing, and both Princeton University and St. Andrews University in Scotland gave him an Honorary Doctorate of Music. Dylan‘s work has had a serious impact on music, popular culture and literature. His lyrics have transcended over the years and continue to make sense to this day – something few artists can boast.