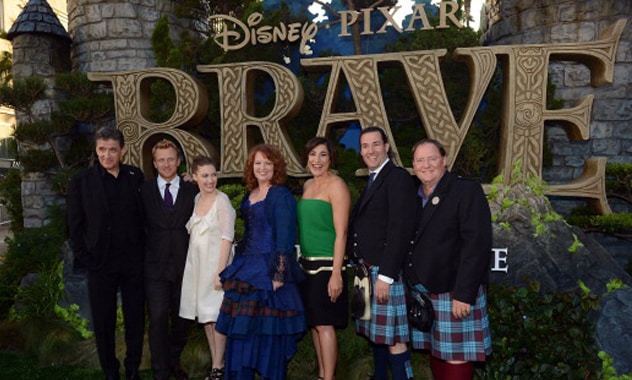 Are you ready to journey to medieval Scotland with Princess Merida and the warriors of Brave? In just one more day, Pixar’s latest animated epic hits the big screen and the film’s lively voice actors couldn’t be more excited.

“It’s totally thrilling to be a part of this movie,” actress Kelly MacDonald told us at a recent junket. “I feel very lucky to have been a part of it and found all of the Pixar people to be very inspiring.”

MacDonald (who currently stars on HBO’s Boardwalk Empire) plays Merida and has some very emotional scenes throughout the film. Her rebellious nature sets her apart from typical Disney princesses, particularly her skill with the bow and arrow.

“Merida is a great character, but she and I are very different,” MacDonald confessed. “I was much more indoorsy when I was young. She’s much more energetic and outspoken than I ever was.”

Academy Award winner Emma Thompson has a prominent role too, as the stoic Queen Elinor. And though she was born and raised in Britain, Thompson proudly proclaimed her Scottish heritage and felt her mother’s native country was represented well.

“The character of Scotland has been brilliantly realized with this movie,” she said. “The Pixar team actually traveled there when doing research for the film. I think they really connected with the countryside.”

Scottish native Billy Connolly added to the authenticity, particularly with the brogue he used when voicing King Fergus. And though he plays a gruff sword-slinging barbarian, Connolly made sure to add some sensitive touches to his performance.

“I really like King Fergus,” he said. “He’s a magnificent warrior, but he’s actually much softer than he appears.”

Even Scottish late night host Craig Ferguson got in on the action, playing the salty Lord Macintosh.

“Macintosh was a lot of fun,” Ferguson emphasized. “He’s a bit of a grump and he’s bad tempered and stuck in the old ways, but deep down he’s a good guy.”

But beyond the hollering Braveheart wannabes, this movie belongs to Merida. As Kelly explained, Brave has multiple layers and should hopefully appeal to fans of Disney and fans of great storytelling.

“There are definitely some magical aspects to this movie,” she said. “But when it comes down to it, Brave is really a coming-of-age story.”

You can certainly see for yourself when Brave arrives in theaters this Friday.

Justin Bieber Passes Out Backstage On ‘Justin Bieber: All Around The World’
Electric Daisy Carnival Deaths: 2 Die In Las Vegas After Having Attended Festival