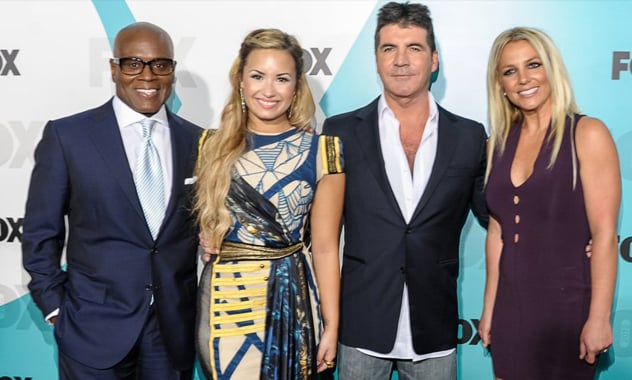 It may be 90 degrees in Austin today, but things just got much  hotter when Britney  Spears and Demi  Lovato arrived to their very first round of X Factor  auditions!

But they didn’t arrive together. All four reality TV judges—don’t forget Simon  Cowell and L.A. Reid!—rolled up to the venue  solo.

Over 100 fans lined up outside the Frank Erwin Center behind barricades to  get a glimpse of the four walking into the auditorium.

L.A. Reid—in his signature suit and tie—was the first to  arrive. He posed for photos and spoke briefly to a house crew, saying, “I love  Austin.”

Lovato, 19, arrived next in a yellow Topshop dress and cropped black jacket.  She looked at press and smiled, “You’re much nicer than they are in L.A.”

Both Spears and Lovato have taken to Twitter to share their X Factor  excitement. “So excited to be going to Austin this week for @TheXFactorUSA  auditions!” Spears tweeted. “Will I see any of y’all there on Thurs or  Fri?”

Last to arrive was X Factor head honcho himself, Mr. Cowell, dressed  in his usual T-shirt and jeans. When photographers tried to get him to take his  sunglasses off for pics, he said, “It’s too bright.”

About 200 aspiring singers will face the judges during four three-hour show  tapings over the next two days (7,000 wannabe contestants were auditioned and  screened here a couple of weeks ago).

Now we want to hear from you. How do you think Spears and Lovato will do as X Factor judges? Sound off below!

by Marc Malkin and Brett Malec

Lindsay Lohan’s Elizabeth Taylor Biopic Gets Its Richard Burton—Find Out Who He Is!
Casey Anthony: Meet the Teen Actress Playing Her in TV Movie