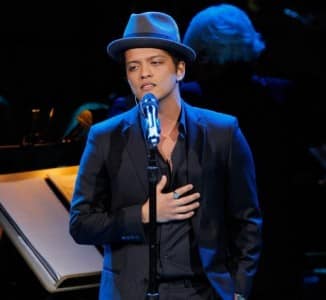 Bruno Mars fans who may have read the news on CNN yesterday might have been under the impression that Bruno came out waving his rainbow flag. Bruno’s reps, however, are saying he did not, in fact, come out of the closet. They claim the story is “completely fabricated” and false.

The breaking news first appeared on an unnamed site online, claiming Mars had come out during an interview with a Chicago radio station. It may have been misinterpreted as an April Fool’s joke, and written off as bad timing, but it was enough to get fans tweeting and for speculations to take place. CNN even ran with the story, claiming,

CNN has since deleted the story, and Bruno’s rep remains firm that the story was a fake.

Mars was quoted in the mysterious interview,

“The timing is bad. I hadn’t realized it was April Fool’s Day, but it’s been pointed out to me, and I don’t want to go too public with this.”

Timing is everything, Bruno. Especially in show business. What does this mean for Bruno? Gay, or nay?

Mars has stayed quiet on the matter, and no confirmation or denial has come from the singer himself. Bruno appears on this month’s cover of Playboy, the ‘Sex And Music Issue.’ He can be seen playing guitar while playmate Raquel Pomplun straddles his knee.