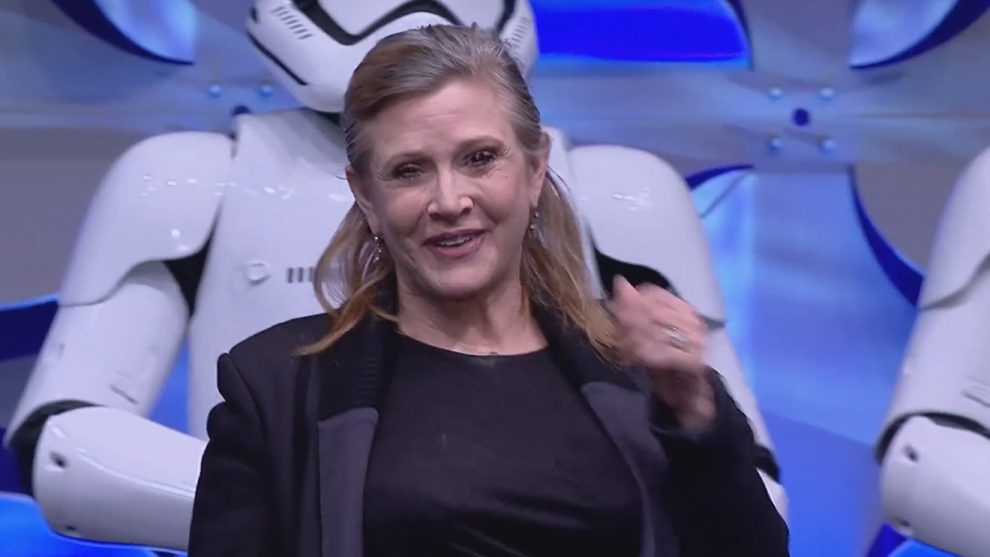 One of the biggest mysteries about the upcoming Episode IX is how the narrative would address Carrie Fisher’s absence as Leia Organa, with the actress having passed after completing her filming on The Last Jedi and that film concluding with Leia’s survival. In a new statement released by Lucasfilm, the studio has confirmed Leia will appear in the film using footage that was previously shot for The Force Awakens.

“We desperately loved Carrie Fisher,” says director J.J. Abrams. “Finding a truly satisfying conclusion to the Skywalker saga without her eluded us. We were never going to recast, or use a CG character. With the support and blessing from her daughter, Billie, we have found a way to honor Carrie’s legacy and role as Leia in Episode IX by using unseen footage we shot together in Episode VII.”

Despite fans enjoying Leia’s journey in The Last Jedi and audiences’ first glimpse at her abilities with the Force to survive the harsh climate of space, fans couldn’t help but wonder whether or not she would survive the narrative. Seeing Leia escape Crait with the help of Luke’s Force projection inspired countless theories about her role in Episode IX.

In the novelization of The Last Jedi, there are mentions about the long-lasting effects of being exposed to outer space, including the impact of solar radiation and lack of oxygen in her body tissue. Were she to have suffered more gravely than initially witnessed, some fans thought we would see her funeral early on in the film, which could possibly reintroduce Billy Dee Williams as Lando Calrissian.

Many had thought that Last Jedi writer/director Rian Johnson would alter the film to explain the actress’ absence in Episode IX, and while that avenue was considered, the filmmaker didn’t want to modify Fisher’s final performance.

“She passed away around New Year’s. We got back after the holiday break and went in the edit room and looked through all of her scenes and had a conversation with [Kennedy] and the question briefly arose, ‘Do we try and do something? Do we try and manufacture an ending for the character or something?'” Johnson shared with the Bullseye with Jesse Thorn podcast. “I felt strongly and we decided pretty quickly no, we’re gonna let this performance stand.”

Another interesting detail about the studio’s announcement is that it confirms Williams will return as Lando, in addition to Mark Hamill returning to the saga. With Luke Skywalker having died in The Last Jedi, fans are now wondering what his role will entail.