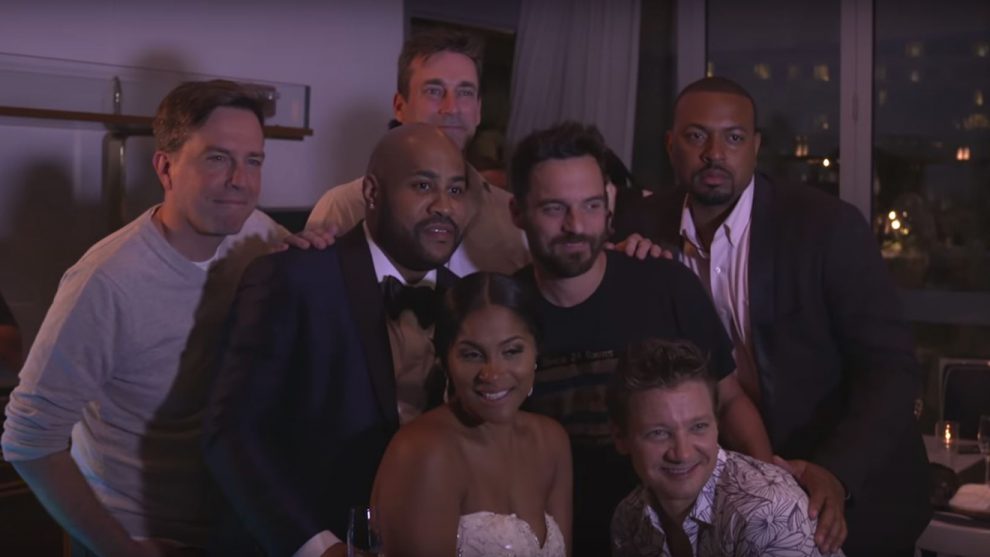 The cast of the New Line Cinema comedy TAG have been playing a cross-country game of tag as they travel to promote the film. Last night, the game was in full swing at the Fontainebleau Miami Beach hotel, when the cast unexpectedly crashed into a wedding reception at the hotel during the Best Man speech!

Jeremy Renner grabbed the mic to apologize and explain, when the rest of the cast, Jon Hamm, Ed Helms, and Jake Johnson, busted into the reception hot on his tail! The newly married couple and their guests loved the surprise. The actors called a time-out to take pictures with the happy couple!

ABOUT TAG
For one month every year, five highly competitive friends hit the ground running in a no-holds-barred game of tag they’ve been playing since the first grade—risking their necks, their jobs and their relationships to take each other down with the battle cry: “You’re It!”  This year, the game coincides with the wedding of their only undefeated player, which should finally make him an easy target.  But he knows they’re coming…and he’s ready.  Based on a true story, the New Line Cinema comedy “Tag” shows how far some guys will go to be the last man standing. TAG is set for a June 15, 2018, release.