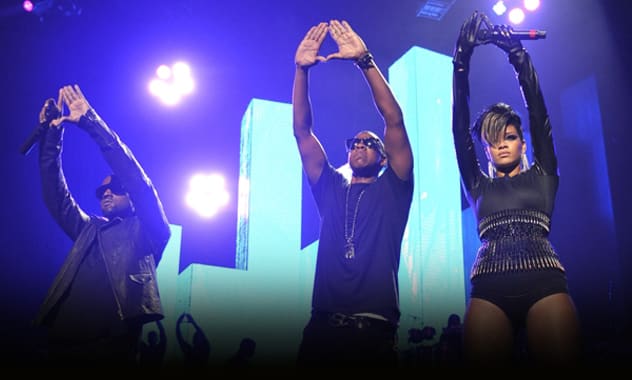 A host of celebrities are said to be  following in Stevie Wonder’s footsteps by boycotting the state of Florida in  protest of their ‘Stand Your Ground’ laws after last week’s Trayvon Martin  verdict.

Madonna, Usher, Kanye West, Jay Z, Rihanna  and Rod Stewart are all said to have decided not to hold any concerts there  until the law is repealed.

Wonder announced his decision to not only  boycott Florida but any state with the law just two days after George Zimmerman  was sensationally cleared of all charges in relation to the shooting death of  17-year-old Trayvon Martin.

The singing legend said two weeks after the  verdict: ‘I decided today that until the  Stand  Your Ground law is abolished in Florida, I will never perform there  again.

‘As a matter of fact,  wherever I find that  law exists, I will not perform in that state or in  that part of the world. The  truth is that – for those of you who’ve  lost in the battle for justice,  wherever that fits in any part of the  world – we can’t bring them back.

‘What we can do is we can let our  voices be  heard. And we can vote in our various countries throughout the world for change  and equality for everybody. That’s what I know we can  do.’

Beyonce and Jay Z joined Trayvon’s mother  Sybrina in New York at the weekend where mass protests over the verdict took  place.

Around 23 other states in the U.S. have Stand  Your Ground laws or similar which provides varying degrees of legal protection  for the use of force in self-defense situations.

A source close to Rihanna told the Huffington Post  that the singer was not planning on  boycotting Florida.

The Justin Timberlake and Jay Z concert will  go ahead as planned in the Sun Life stadium on August 16, despite the rapper’s  support of the movement at the weekend.

The Rev Al Sharpton’s National Action Network  organized Justice for Trayvon rallies and vigils outside federal buildings from  noon in at least 101 cities, from New York and Los Angeles to Wichita in Kansas  and Birmingham, Alabama.

On Saturday morning he told supporters in  Manhattan he wanted a rollback of stand-your-ground self-defense  laws.

‘We are trying to change laws so that this  never, ever happens again,’ he said.

‘We have the strength to wipe our tears away.  Last Saturday we cried. This Saturday we march.’

Trayvon’s mother, Sybrina Fulton, also spoke  at the New York rally, telling the crowd: ‘Today it was my son. Tomorrow it  might be yours.’

She added: ‘Of course we are hurting. Of  course we are shocked and disappointed, but that just means we have to roll up  our sleeves and continue to fight.’

Ms Fulton, her son Jahvaris, and the  Rev Al  Sharpton joined the rally as it marched to One Police Plaza at  noon, where they  were joined by Jay Z and his wife Beyonce.

Although they did not speak at the rally, the  Rev Al Sharpton told the crowd:  ‘Jay Z told me, “I’m a father. Beyonce is a  mother”. We all feel the  pain and apprehension – the laws must protect  everybody, or it doesn’t  protect anybody.’

He added: ‘We do not come from hate, we come  from love of children,’ according to the Huffington Post.

Beyonce had shown her support for the case  last week, asking for a moment of  silence at a concert after the not guilty  verdict was recorded.

In Washington DC, a crowd of more than 500  people gathered as comedian and long-time civil rights activist Dick Gregory  told them to hit Florida  where it hurts – in the wallet – by steering clear of  Disney World and  the orange juice aisle.

News of the boycott call came as Senator John  McCain (R-AZ) joined President Barack Obama in calling for a review of Stand  Your Ground laws across  the nation.

‘I can also see that Stand Your Ground laws  may be something that needs to be reviewed by the Florida legislature or any  other legislature that has passed such legislation,’ McCain told  CNN, adding that his home state of  Arizona should consider similar action.

Former Governor Eliot Spitzer, who attended  the New York rally, said:  ‘Regardless of how you view the legality of the  verdict in isolation,  justice here was denied. An innocent young man was shot  and killed and  that is a tragedy.’

Attorney General Eric Holder  announced last  week that the department would investigate whether the  Hispanic neighborhood  watch man could be charged under those federal  civil rights laws, which would  require evidence that he harbored racial  animosity against Trayvon.

Most legal experts said it would be a  difficult charge to bring.

Tune In To: HOUSE OF JOY Only On NUVOtv
Kate Middleton Gives Birth TO Royal Baby…Boy!