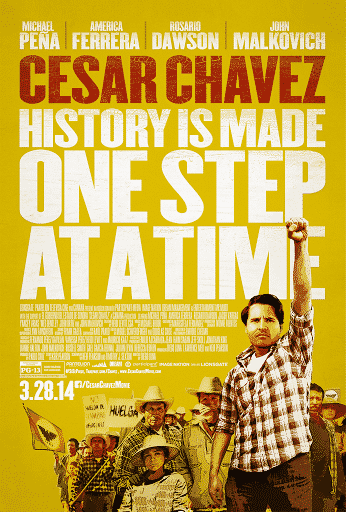 Pastor Rodriguez has seen the upcoming biopic CESAR CHAVEZ and shares his thoughts on the film, the icon, and why it is important we support this film at this moment in our nation’s history.

“The movie is a long overdue tribute to a man who was willing to be a martyr for those who could not help themselves. I support this movie and encourage everyone to see it.   It will change hearts and minds.”

“The film itself stood true to form in regards to capturing the organizing of farm workers in Delano, California, eventually leading to the United Farm Workers; which led to a National movement that brought about better working conditions and higher wages for the field workers, as well as, social change.  Chavez brought about this change through nonviolent civil disobedience, social activism, and hunger strikes.”

In Cesar Chavez, the movie – the director, Diego Luna, does a masterful job of sticking to the story, mainly; how Cesar Chavez,Dolores Huerta, and their colleagues champion the cause of social and economic justice for marginalized migrant and farm workers. How a movement swept a city, then a state, and finally a nation, which eventually led to social and economic change for these workers and others – even passing new legislation.  The director does manage to capture snippets of Chavez personal life, like his rocky relationship with his eldest son Fernando, but within the context of each of these snippets lays embedded the ideals of the story, such as, the triumphant struggle, overcoming racial prejudice, reforming injustice, personal sacrifice for the cause, further solidifying Chavez in the hearts of the audience.  Luna also manages to debunk Chavez detractors who claim he was a Communist, while at the same time, weaves Chavez’s Catholic faith into the fabric of the movie without alienating the audience with uber-religious or political indoctrination or fanaticism.

Chronicling the birth of a modern American movement, Cesar Chavez tells the story of the famed civil rights leader and labor organizer torn between his duties as a husband and father and his commitment to securing a living wage for farm workers. Passionate but soft-spoken, Cesar Chavez embraced non-violence as he battled greed and prejudice in his struggle to bring dignity to people. Cesar Chavez inspired millions of Americans from all walks of life who never worked on a farm to fight for social justice. His triumphant journey is a remarkable testament to the power of one individual’s ability to change the world.

CESAR CHAVEZ on the Web