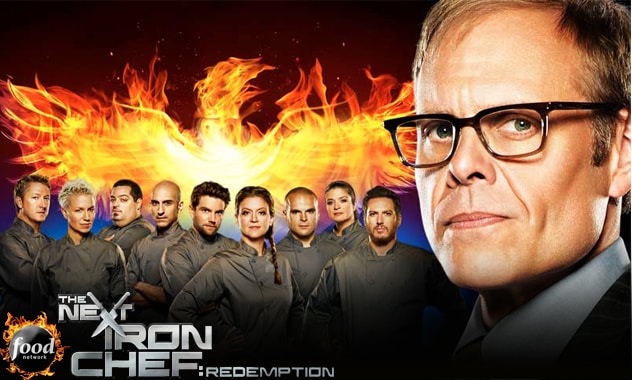 A roster of acclaimed chefs return for a second chance to become a member of the Iron Chef culinary society this fall, with the premiere of The Next Iron Chef: Redemption on Sunday, November 4 th at 9pm ET/PT.   The fifth installment of this top-rated competition series also adds a few newcomers to the mix, who have had their own experiences of not quite winning the crown.  The competitors are given new opportunities to prove their skills are Iron Chef worthy, while revisiting some of the memorable moments that sent them home in the past.  The culinary battle-royale, hosted by Alton Brown and shot in Los Angeles and Las Vegas, tests the kitchen chops, masterful skills and fortitude of these supreme experts, and culminates with the naming of the newest Iron Chef on Sunday, December 23 rdat 9pm ET/PT.

“This season’s cast is filled with extraordinary chefs at the top of their game and they all know how fierce this competition is,” said Bob Tuschman, General Manager and Senior Vice President, Food Network. “The redemption theme heightens the season’s drama with second chances and new opportunities, and viewers can expect culinary magic, intense battles and edge-of-your seat suspense.”

Redemption offers a Food Network first, as the tenth cast position will go to the winner of the web-exclusive “Road to Redemption” tournament taking place October 12 th – 26th on FoodNetwork.com.  Participants battling for their chance at Redemption’s tenth slot are Duskie Estes and Robert Trevino , who previously competed on earlier seasons of The Next Iron Chef and newcomers Lee Anne Wong and Madison Cowan .

“Our web-exclusive ‘Road to Redemption’ tournament adds a whole new layer to The Next Iron Chef experience,” said Bob Madden, General Manager and Senior Vice President, Digital – Food Network Category, Scripps Networks Interactive.  “This online exclusive will give our audience more of the content they crave and the opportunity to witness more excitement and energy from these skilled competitors.  FoodNetwork.com is thrilled to play a part in selecting the tenth competitor for this season’s cast.”

Exclusively on FoodNetwork.com, the “Road to Redemption” tournament begins October 12th with a battle between former Next Iron Chef contenders Duskie Estes and Robert Trevino, followed on October 19th by a competition between Iron Chef America challengers Madison Cowan and Lee Anne Wong. The winners meet on October 26th, where the final Redemption position will be awarded.  Beginning in late September, a sneak peek and extended preview will be available at www.foodnetwork.com/nic.

The Next Iron Chef: Redemption kicks off on “Redemption Beach,” where the chefs’ resourcefulness is tested in a grueling Chairman’s Challenge with a devious twist: each must cook with the ingredient that sent them packing last time.  Given another chance with this ingredient and only bare essentials, hot coals and one hour on the clock some rise to the occasion while others go down in flames. The two least successful chefs go to the Secret Ingredient Showdown, a sudden-death cook-off that leads to the first elimination.  Upcoming episodes continue to push the limits, including a canned food to Kitchen Stadium-worthy cuisine challenge, a Las Vegas buffet battle with an appearance by legendary magician David Copperfield and a “last supper” showdown. Returning judges Donatella Arpaia and Simon Majumdar are joined by last season’s winner and newest Iron Chef Geoffrey Zakarian on the judging panel, along with appearances from Iron Chefs Bobby Flay , Masaharu Morimoto and Michael Symon .

The winner will join the ranks of chefs including Bobby Flay, Marc Forgione, Jose Garces, Masaharu  Morimoto, Michael Symon and Geoffrey Zakarian as a member of the Chairman’s team on Iron Chef America.  The newly crowned Iron Chef’s first battle in Kitchen Stadium will premiere on Sunday, December 30th at 9pm ET/PT.

The Next Iron Chef is produced by Triage Entertainment in conjunction with Food Network and is based partially on the format Iron Chef owned by Fuji Television Network Inc.

The iHeartRadio Music Festival Rocked Las Vegas For The Second Year With The Biggest Concert & Talent In Radio History
Snooki Shares New Photos Of Lorenzo, Gushes ‘In Love With My Little Man’