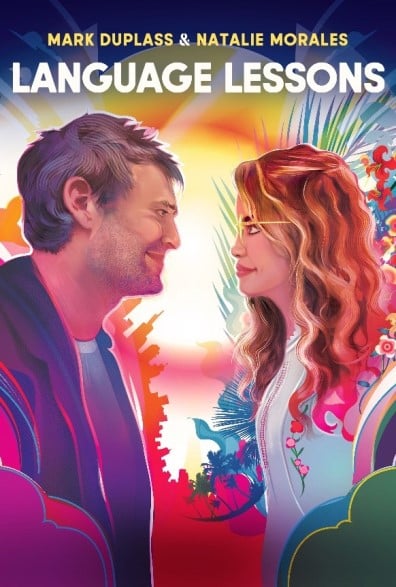 The Critically Acclaimed Collaboration Between Natalie Morales and Mark Duplass Will be Available on Digital and On Demand October 26, 2021 from Shout! Studios

Bittersweet, honest, and at times darkly funny, the critically acclaimed dramedy feature Language Lessons is a disarmingly moving exploration of platonic love. Co-written by and starring Mark Duplass (The Morning Show, Bombshell) and Natalie Morales (Dead to Me, Spider-Man: Into the Spider-Verse) and directed by Morales, the film will be available everywhere on Digital and On Demand October 26, 2021 from Shout! Studios.  A poignant and heartwarming story, Language Lessons is the winner of the 2021 SXSW Narrative Spotlight Audience Award and the 2021 Provincetown Best Narrative Film Audience Award. Fans can pre-order their copies now via iTunes.

When Adam’s (Mark Duplass) husband surprises him with weekly Spanish lessons, he’s unsure about where or how this new element will fit into his already structured life. But when tragedy strikes, his Spanish teacher, Cariño (Natalie Morales), becomes a lifeline he didn’t know he needed. Adam develops an unexpected and complicated emotional bond with Cariño—but do you really know someone just because you’ve experienced a traumatic moment with them?

About Mark Duplass
An award-winning actor, filmmaker and producer, Mark Duplass has appeared in a wide range of film and television projects, including the Apple+ series The Morning Show for which he received a 2020 Emmy nomination for Best Supporting Actor.  A familiar face to both indie and mainstream audiences, Duplass is also known for his roles in acclaimed HBO show Togetherness, Gotham award-winning Your Sister’s Sister, the Oscar-winning Zero Dark Thirty, the contemporary classic sci-fi films The One I Love and Safety Not Guaranteed, Bombshell opposite Charlize Theron, Paddleton with Ray Romano and the Creep horror franchise.

Under the banner Duplass Brothers Productions alongside his brother Jay Duplass and Mel Eslyn, Duplass has produced a variety of acclaimed original projects for film, television, and digital media. Highlights include Netflix’s Wild Wild Country, winner of the Emmy Award for Outstanding Documentary or Nonfiction Series in 2018, and the hit HBO series Room 104, Togetherness, Animals, and most recently, The Lady and The Dale.

About Natalie Morales
An actor, director, writer, and activist, Natalie Morales most recently starred alongside Christina Applegate and Linda Cardellini in the Netflix series Dead to Me.  Other notable recent projects include The Little Things, alongside Academy Award-winners Denzel Washington, Rami Malek and Jared Leto; the Oscar-winning Spider-Man: Into the Spider-Verse, starring in NBC’s Abby’s as the titular character, and she recurred on HBO’s The Newsroom and Girls, NBC’s Parks & Recreation and Netflix’s Santa Clarita Diet.