Supergirl has moved to The CW, and with that comes the exciting prospect of many superhero-based crossover episodes. Before that was even a possibility, fans of the female-driven superhero drama were anxiously waiting for the heavily referenced cousin of Kara, Kal-El (aka Superman) to finally land and show his face. It was recently announced that actor Tyler Hoechlin (Teen Wolf) would be playing the world-renowned role, and The CW has now released the very first look at Superman. Take a look. 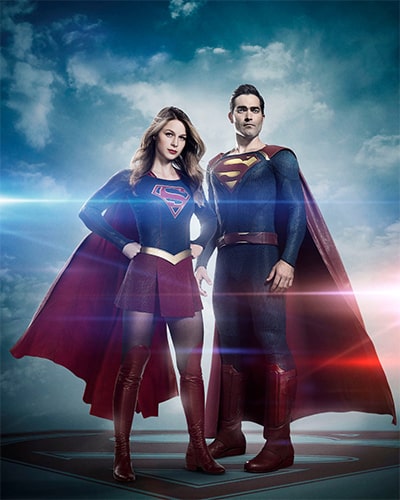 Admittedly, Hoechlin felt like a somewhat questionable choice to fill the shoes of Tom Welling’s Clark Kent (Smallville), given the list of potentials his name was among. But we must admit — he’s definitely working this Superman look quite well. From the chiseled jawline to the cleft chin, all the way to baby blue eyes, something tells us this guy is going to pull off playing the Last Son of Krypton quite well.

Hoechlin is also no stranger to the superhuman genre. His work as an evolved werefolf in Teen Wolf has proven that he can hold his own as a super-powered stud. Now we just have to see if his performance will prove worthy to be in the ranks of past Supermen like Christopher Reeve (Superman movies), Dean Cain (Lois & Clark), Brandon Routh (Superman Returns), Henry Cavill (Man of Steel) and the aforementioned Tom Welling.

Supergirl season 2 premieres Monday, October 10 at 8pm on The CW.