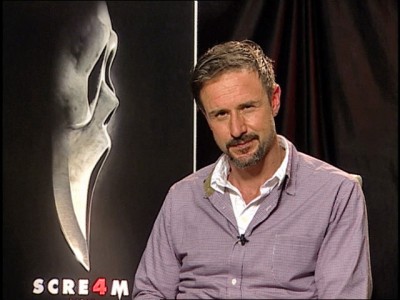 David Arquette ranks SCRE4M right up there with the first film and promises the opening scene is just as strong as Drew Barrymore‘s cameo in the first Scream.

David Arquette sat down with Zay Zay in Miami to talk about the fourth film in the Scream installment and reuniting with Neve Cambpell, Courteney Cox, and director Wes Craven.   The SCRE4M star explains why they waited ten years between sequels and the reason for being contractually obligated to keep his “trap shut” about the film.

The first Scream movie set a precedent for opening scenes when Drew Barrymore was killed off right away, shocking audiences much like Alfred Hitchock did in Psycho (1960) when he killed his main star Janet Leigh.   David called the opening scene for SCRE4M “exciting” and one of the strongest with great “twists.”

For more with David Arquette, watch our video interview below.