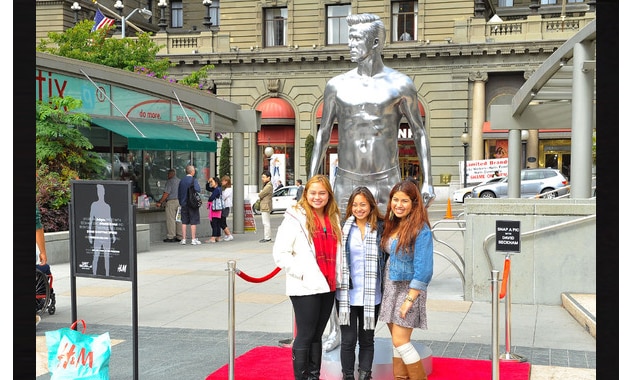 Thank you, H&M, for bringing us the sexiest silver statue we’ve ever seen.

If you’re scratching your head as to why, exactly, we’re swooning over this abtastic sculpture, then take a closer look—because that is indeed soccer stud David Beckham. In solid form. In his underwear.

The 36-year-old hunk debuted his bodywear for H&M back in January, and as an ode to the underwear campaign with the clothing conglomerate, statues of Becks (in his skivvies, natch) have been popping up all over the U.S.

According to reports, there are several in New York, one in San Francisco (Union Square to be exact) and two in Los Angeles. Fellow Angelinos can go sneak a peak at Victoria Beckham‘s better half at the intersection of Hollywood Boulevard and Highland Avenue, as well as at the Beverly Center.

Although the sculptures are certainly fun and sexy, we get a far better look at the father of four’s swoon-worthy body parts in the photographs from the ad campaign.

But, the silver lining to the statue sitch?

You can now go kiss his rock hard tush.