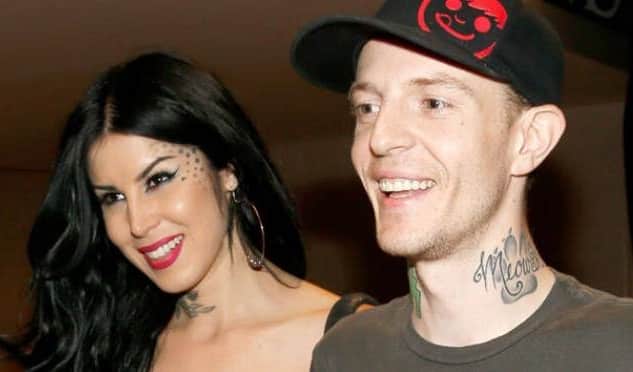 Looks like Kat Von D is giving marrage another shot. This time with on-again-off-again-now-fiancé Deadmau5.

The deejay took to Twitter to ask his inked girlfriend the big question, tweeting:

“I can’t wait for Christmas so…. Katherine Von Drachenberg, will you marry me?” and posted a picture of the potential ring, adding in graphics: “Changing the diamond to a black diamond FYI. Sorry for the jpg…they’ll finish the actual ring soon I hope. I love u :D”

The couple, who also took to Twitter to reveal their short breakup back in November, began dating back in September, after meeting one another at a party.

As for Kat’s answer to the proposal?

The L.A. Ink star said yes, with of course, in a tweet in which she revealed: “Mi corazon!!! Thank you all for the lovely congratulations! Please excuse me while I go squeeze the hell out of my fiancé! ❤”

Kat was previously married to Olivier Peck in 2003, then engaged to Jesse James first in January 2011 and again in August 2011 after calling it off. Jesse and Kat called it quits for good a month later in September.

This will be the first engagement for the deejay.