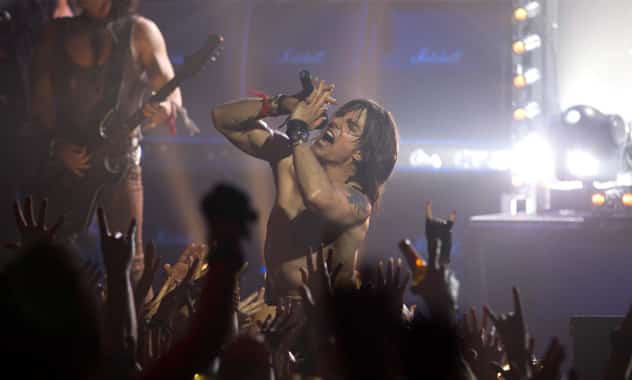 Def Leppard has no shame.

When it comes to riding the fur-covered, animal print-lined coattails of “Rock of Ages,” the big-screen musical opening Friday about love and hair bands in the 1980s, the group isn’t shying away from commandeering some of the film’s spotlight to remind everyone they’re still around, and they’re still rockin’. “Rock of Ages” was, after all, the title of a Def Leppard hit long before it was a Broadway musical.

The British band – lead singer Joe Elliott, bassist Rick Savage, drummer Rick Allen and guitarists Phil Collen and Vivian Campbell – re-recorded two of their songs that appear in the film, and they’re teaming up with Poison and Lita Ford for a summer tour kicking off June 20 in Salt Lake City.

“The movie helps a lot without the momentum of something like a new album,” said Elliott during a break from rehearsing for the tour, which they’re not-so-subtly calling the “Rock of Ages” tour.

In the movie, Tom Cruise’s out-there rocker Stacee Jaxx performs a splashy version of Def Leppard’s 1987 “Pour Some Sugar on Me.” The band was unavailable to film a cameo alongside the likes of Sebastian Bach and Debbie Gibson, who appear in the movie, but Elliott and Savage are fully supportive of the homage to the 1980s rock scene and believe it will lure new fans to their shows.

AP: You weren’t associated with the “Rock of Ages” stage show but you are with the film. Why’s that?

Joe Elliott: You could say with hindsight that we didn’t make a wrong decision, we just made a decision. We revisited that decision when they threw out the idea of the film to us because they mentioned people like Tom Cruise and Alec Baldwin and Russell Brand and Catherine Zeta-Jones and the director who did “Hairspray.”

AP: Did you ever in a million years think Tom Cruise would be singing one of your songs in a musical?

Joe Elliott:  Could you imagine if it was though? You get in the shower one day and go, “I wonder if Tom Cruise will ever sing `Pour Some Sugar on Me?'”

Rick Savage: We were fortune enough to check his filming out of that particular performance because we were both in Florida at the same time. We were about half an hour’s drive away. We just had to get there as he was shooting some of the scenes. That was special in itself, just getting to meet the man.

Joe Elliott: It was pretty surreal, actually. We just walked into this little seedy club in Ft. Lauderdale, and there up on stage is Stacee Jaxx doing “Sugar.” It’s like, “What is this?” It’s nuts.

AP: What did you think of his interpretation of the song?

Rick Savage: His voice was good.

Joe Elliott: Yeah, we were talking to him between takes, and he was a little put out that we were there at first, you know, “Uh oh. The queen’s in town!” He said, “What do you think?” I said, “Can you sing?” He said, “No, I started like four or five months ago, just a couple of hours a day.” He had other movies he was shooting, so it was like a part-time thing. I’m thinking, “Wow. If he’s got that good in four or five months, that’s much better than half the people on some of these talent shows.”

AP: Why did you decide to release re-recorded versions of “Rock of Ages” and “Pour Some Sugar on Me” this summer?

Joe Elliott: Our work is not available on any digital domain, except for the last album, the “Mirrorball” album, because it’s a catalog issue with the record label, so we just wanted studio versions of those songs available for this summer because of the film coming out.

Joe Elliott: We had to be really careful that we actually studied them, literally like forgeries. It’s like Donald Pleasence in “The Great Escape” doing passports. It’s got to be exactly the same to fool the old German guard. That’s the same thing with these songs. We wanted them to have the same energy, that youthful exuberance we had in `83 and `87, so people that are sympathetic to our cause listen to them and say, “Wow, they’ve still got it. They can perform the songs the way they did back then.”