Miley Cyrus is the victim of a death hoax, mostly because of a Facebook scam, but partly because fans were so shocked that she hadn’t shared anything on social media for three days they assumed that she must be dead. 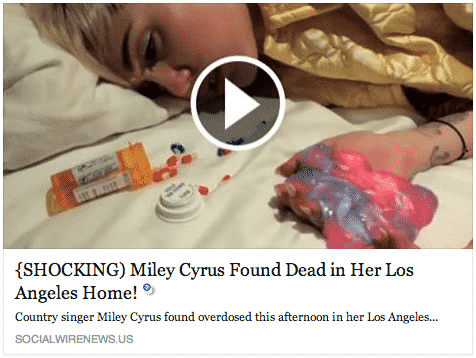 But it seems that it was her short absence from Twitter and Instagram that led fans to believe the news.

“Miley hasn’t posted anything on Instagram since July 18 — and now fans fear the worst,” cried HollywoodLife.

And they really did:

Not that we’ve been able to get hold of Cyrus’ spokesperson, but apparently the singer has found the speculation entertaining. In fact, she doesn’t mind too much if her hystericals fans think she’s dead.

“She is aware of the death hoax and thought it was actually pretty funny,” a source told HollywoodLife.

“By not responding, she thinks it is that much more of a joke because people are continuing to believe it. She has mentioned to friends that this is her Paul[McCartney] is dead Beatles moment.”

Fear not, the singer will doubtlessly be back with full twerking vengeance for the VMAs on 24 August, after being nominated forBest Video and Best Direction for “Wrecking Ball“. Something for us all to look forward to.