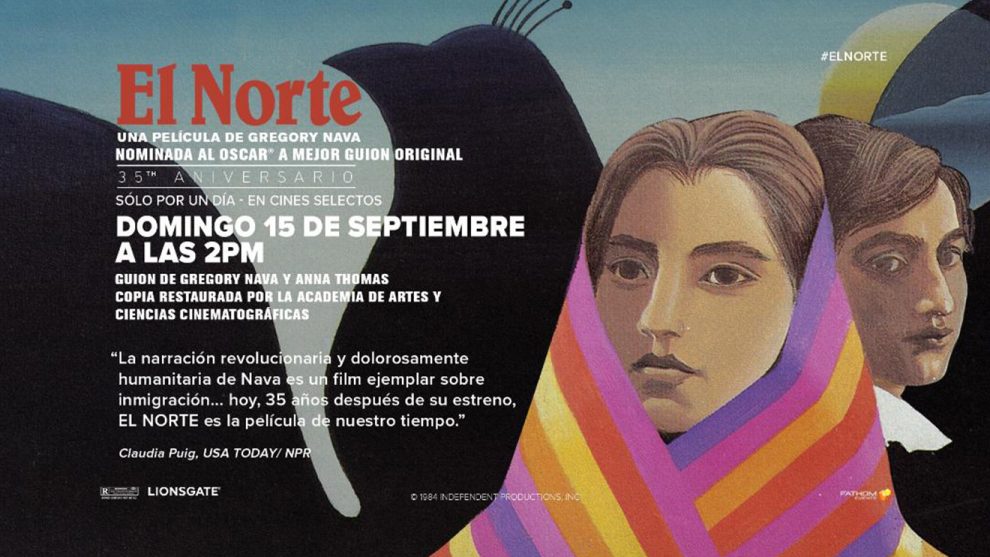 ‘El Norte,’ the Acclaimed and Timeless Saga of the Central-American Immigrant Experience, Returns to Movie Theaters for One Day Only

35 Years After Its Original Theatrical Release, the Oscar® Nominated Epic, Restored by the Academy of Motion Picture Arts & Sciences, Will Play on More Than 200 Screens in Select Markets

“El Norte,” the epic, widely acclaimed masterpiece about the dreams of immigrants and the promise of America, will return to movie theaters in select markets this September in a special one-day-only 35th anniversary presentation from Fathom Events and Lionsgate.

Directed by Gregory Nava from a screenplay co-written by Anna Thomas, “El Norte” will play on Sunday, September 15, in more than 200 movie theaters nationwide. This special one-day-only presentation will include an exclusive introduction by Nava, whose films include the beloved hit “Selena.” The Fathom Events presentation will also include a brand-new featurette that explores the making of the film and features the film’s stars, Zaide Silvia Gutiérrez and David Villalpando.

Tickets for “El Norte 35th Anniversary” are available at www.FathomEvents.com and at participating movie theater box offices. All event attendees will also receive a free, two-week trial offer to Pantaya, where they can find the best movies and TV series in Spanish, all in one place.

The Fathom Events presentation of “El Norte” is the film’s first theatrical release since it debuted in U.S. theaters in early 1984, and will be shown in a newly restored version of the film that Nava produced with the help of the Academy of Motion Picture Arts & Sciences. Following this special event, Lionsgate will release “El Norte” on digital formats on September 17.

“Nava’s groundbreaking and achingly humanistic narrative is the quintessential film about immigration,” noted film critic Claudia Puig (USA Today/NPR) wrote. “Today, 35 years after its debut, ‘El Norte’ is the film of our time.”

Nominated for an Oscar® for its emotional and compassionate screenplay, written by Nava and Anna Thomas, “El Norte” was named to the U.S. National Film Registry in 1995. The film follows the struggle of two siblings, Rosa (Gutierréz) and Enrique (Villalpando) as they flee military violence and terror in their small rural home in Guatemala. They have heard stories of the promise of el Norte, or “the North,” and when their home is massacred by the military, they decide to make the dangerous trek through Mexico and into the United States. Once there, Rosa and Enrique discover that their arduous journey is far from over, and that the dangers they face as immigrants are different, but no less life-threatening, than the dangers they thought they left behind.

“‘El Norte’ is a special, magical film, a cinematic epic we are proud to showcase, particularly as issues of immigrants and their hopes and dreams fill the headlines,” said Tom Lucas, Fathom Events Vice President of Studio Relations. “Gregory Nava has created a modern American epic, one that resonates as strongly today as it did 35 years ago.”