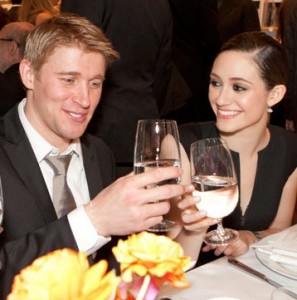 Let’s play two degrees of separation. Emma Rossum, who plays Fiona on Showtime’s hit series Shameless, is dating her Shameless co-star Tyler Jacob Moore, who plays Tony, the cop who goes gaga for her in the show.

In real life, however, Emma and Tyler go on double dates with Lady Gaga and her man, Taylor Kinney, who made a couple of appearances on Shameless in the show’s recent season.

How does something like this happen? Apparently, Emma met Gaga through Taylor while he was on the show. The foursome had a great time staying in on their double date. Rossum said,

“We stayed in, cooked steaks, and watched Shameless. It was all very normal, and she is so nice.”

Yeah, because it’s always normal to watch yourself on television while you have steaks with Lady Gaga. Not to mention the fact that Tyler Kinney played Craig, Fiona’s love interest, for two episodes of the show. Craig and Fiona were high school sweethearts who rekindled their romance in a one-time fling in the back of a mini van full of kiddie toys. Gee, how come that never worked out?

Emma has come a long way from her 2009 divorce from music executive Justin Siegel, although she admits it was not easy at first. Rossum said,

“Everyone messes up in their relationships and has peaks and valleys in their personal lives. When I realized it wasn’t the end of the world and I would keep on standing, I knew it was going to be OK.”

That’s the spirit. Fiona wouldn’t be sad about a little breakup, considering all she has on her plate. Frankly, I like the fact Emma Rossum is dating Tyler Jacob Moore in real life. I always wanted Fiona to hook up with Tony on the show.

Tyler Jacob Moore now plays Pastor John Tudor on the new ABC hit comedy, GBC. I can’t decide whether he looks sexier as a pastor or a cop.