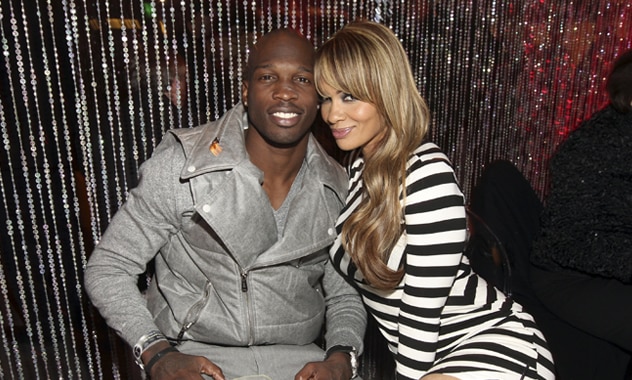 Evelyn Lozada and Chad Ochocinco are now husband and wife.

The reality star and football player got hitched in Miami on Wednesday,  entertainment site Gossip Cop

The publication says that the couple, who got engaged in 2010, tied the knot  amongst friends, family members and, as usual, reality show cameras documented  their every move for the VH1 show “Ev and Ocho.”

The wedding ceremony is scheduled to air on VH1  in September.

Ochocinco, formerly known as Chad Johnson, even found time to live tweet  throughout his entire wedding telling his fans via the social media site that he  was excited and nervous.

“Live tweeting from my wedding… should be a first I’m assuming, music is  playing, can’t see my guest right now but they’re here… #nervous,” Ochocinco  posted on his Twitter account

“I don’t recall sending the butterflies in my stomach and invite,” he  continued. “Why am I shaking like I’m in Alaska[?],” he wrote.

The football player also informed his fans that Lozada had multiple wardrobe  changes and that she along with most of the guests were “wasted.”

He then posted a photo of him and Lozada showing off their wedding rings.

It’s been one hectic trip to the isle since last month the couple did not  know where they would be having their wedding reception.

The NFL wide receiver  and Lozada were not welcomed at some pricey South  Florida hotels because of her reputation for violent outbursts and fist fights,  which have been well-documented on her VH1 show, “Basketball Wives.”

Lozada and Ochocinco’s latest reality show, “Ev and Ocho,” is supposed to end  with the couple walking down the aisle. It seems that the lovebirds found a  location that didn’t shut them out and was able to deal with the TV drama.

TMZ says various top-of-the-line hotels, including the St. Regis in Bal  Harbour, The Ritz in Miami and the The Breakers in Palm Beach, were not willing  to risk having the couple air their wedding and their baggage at their luxury  digs.

Hotel officials also told  producers of the show they didn’t want   their hotels seen in a negative light.